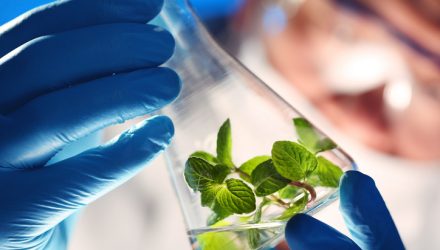 Investors Are Moving Back Into Resurgent Biotech ETFs

After stumbling through much of 2019, biotechnology ETFs are finding their grooves in the fourth quarter. Since the start of the current quarter, the iShares Nasdaq Biotechnology ETF (NasdaqGS: IBB) is higher by more than 16% while the SPDR S&P Biotech ETF (NYSEArca: XBI) is up 17.40%.

IBB allocates its holdings based on their market caps, which translates to more valuable names representing more sizable portions of the portfolio. That structure can provide protection in times of volatility, as larger companies can survive better than their smaller, more focused counterparts. Conversely, XBI is an equal-weight fund.

Regardless of fund structure, data suggest investors have recently been returning to biotech funds.

“In the latest installation of his weekly note tracking biotech fund flows, PiperJaffray analyst Christopher Raymond reported that flows in the sample of 118 health-care/biotech-dedicated funds tracked by Lipper/AMG Data Services were positive for the week ending on Wednesday,” reports Josh Nathan-Kazis for Barron’s.

The biotech segment has found support from Biogen (NasdaqGS: BIIB), which recently rallied after the company reversed a prior decision to abandon experimentation on an Alzheimer’s disease drug and plans to submit the drug for regulatory approval.

When investors are looking for more aggressive rates of growth, biotech stocks typically represent some of the best opportunities for rapid appreciation. These companies spend a plethora of time and massive amounts of money to fund breakthrough biological treatments and diagnostic tools. Blossoming developments can literally change their fortunes, and the fortunes of shareholders overnight.

“Raymond wrote that the funds saw around $122 million of inflows during the week, the second week in a row flows to the funds have been positive. That follows a long, dismal stretch. A month ago, per Raymond’s reports, the funds were in the midst of a run of 12 weeks in which 11 saw outflows,” according to Barron’s.

For the week ending Dec. 5, IBB did see outflows of just over $191 million, but since the start of November, XBI and IBB have added $85.40 million and $46.50 million, respectively, in new assets.

Healthcare stocks are also showing attractive valuations relative to other defensive sectors, which are richly valued. Biotechnology historically trades at multiples that are elevated relative to broader benchmarks, but after last year’s struggles for biotechnology names, some analysts see value with some big-name biotech stocks.