You are at:Home»Thematic Investing Channel»Infrastructure ETF PAVE Gets Boost on $2T Funding Plan 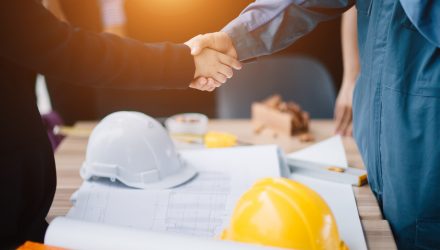 The Global X U.S. Infrastructure Development ETF (PAVE) closed up almost one percent Tuesday, after Democratic congressional leaders met with President Donald Trump and announced an agreement had been reached on the price tag for a potential infrastructure plan: $2 trillion.

According to a report on CNBC, “It was a very constructive meeting,” Senate Democratic leader Chuck Schumer told reporters outside the White House. “We agreed on a number, which was very, very, good, $2 trillion for infrastructure. Originally, we had started a little lower and even the President was eager to push it up to $2 trillion. That is a very good thing.”

Utilities Infrastructure ETFs, which invest in stocks of companies that are engaged in the construction and maintenance of infrastructure within the utilities industry, are typically expected to benefit from any increases in government spending.

PAVE focuses largely on domestic infrastructure, as companies must be listed in and derive more than 50% of their revenue from the US. The fund may include large-, mid-, and small-cap companies. The fund launched in March 2017, and is up more than 22% YTD.

The $116.67 million ETF, which is nearly three years old, holds 93 stocks and over 93% of those holdings hail from the industrial and materials sectors. Infrastructure needs remain dire and obvious, but this is one issue the split Congress could continue to come together on.

According to past comments on Morningstar, “We view mixed control of Congress as a positive for infrastructure. Increased infrastructure funding is a relatively easier issue for which to find bipartisan support than legislation regarding other issues like healthcare or immigration reform. In fact, following the results of the midterm elections, leaders of all three bodies–President Donald Trump, House Speaker Nancy Pelosi, and Senate Majority Leader Mitch McConnell–discussed infrastructure positively.”