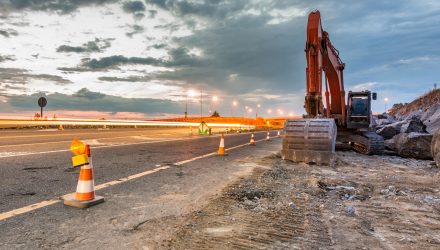 How Infrastructure Dollars Get Spent is a Big Deal

It was a rare display of bipartisanship on Capitol Hill and one that, if executed properly, could benefit PAVE over the long haul because the exchange traded fund (ETF) is focused on domestic infrastructure companies and initiatives.

“The needs are large so a $200 billion proposal would be a good start provided it represents a net increase in investment,” according to Fitch Ratings. “Every state, regional or local transportation, water or power department or independent authority can use an infusion of funds to accelerate projects already in planning and development.”

PAVE debuted shortly after President Trump won the White House, separating itself from rival infrastructure funds with its domestic focus. This year, PAVE is up about 22% and is gaining notoriety as the ideal way for investors to play what could be a substantial domestic infrastructure boom over the next few years.

During the 2016, presidential campaign, Trump promised to spend $1 trillion to shore up America’s sagging infrastructure, but politicians have clearly agreed to exceed that number. The spending required to refresh U.S. infrastructure is massive to say the least.

“Rebuilding a $20 trillion economy with a multi-trillion dollar investment gap will ultimately need an annual new investment of about $1 trillion a year for a while, i.e. 5% of GDP, to meaningfully catch-up,” said Fitch.