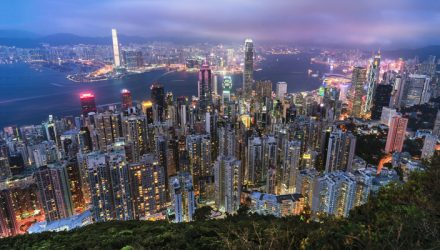 Hong Kong ETF Could Bounce Back in 2020

The iShares MSCI Hong Kong ETF (NYSEArca: EWH) finished 2019 with a double-digit gain, but that’s misleading when considering the ETF slipped more than 7% in the second half of their as geopolitical protests there intensified.

The protests began in June across the city after the government proposed a controversial extradition bill, and violence escalated since June. The city has since slipped into a recession with a number of sectors under duress. However, some market observers believe Hong Kong stocks can bounce back in the new year.

“Months of protests have battered the city and its economy. But against this negative backdrop, the Hang Seng index is breaking out technically on the price charts, Jeff deGraaf, founder of Renaissance Macro Research, observes,” reports Randall Forsyth for Barron’s.

Despite the unrest that has hobbled the local economy, investors may be looking at Hong Kong stocks and related ETFs for the relatively cheap valuations.

Net purchases through the Stock Connect program totaled HK$150 billion, or $19.17 billion, since the beginning of June when protests started to pop up. The purchases are small but still bolstered the Hong Kong stock market, which was worth HK$31.8 trillion at the end of October. The protests has not deterred investors from looking into Hong Kong as net buying has more than doubled to HK$194.8 billion so far this year compared to 2018 flows.

“The relative strength in the stock market also flew in the face of some prominent bears betting on a collapse, not only in equities, but also a break in the Hong Kong dollar’s peg against the U.S. greenback,” according to Barron’s. “The Hong Kong Monetary Authority has maintained the peg in the face of other periods of distress, however, notably during the 1997-98 Asian crisis.”

The $1.77 billion EWH holds 43 stocks and follows the MSCI Hong Kong Index. EWH allocates over 47% of its combined weight to insurance providers and real estate companies.

In spite of the geopolitical volatility, investors added more than $104 million to EWH in the fourth quarter.