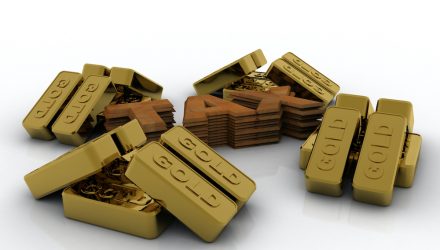 Gold prices are shooting up today, as investors pile into the shiny metal along with equities, giving gold momentum off its recent lows.

Goldman Sachs has reinforced its bullish stance on gold prices, releasing a research report titled “time to buy the currency of last resort.”

While many investors are familiar with gold acting as a safe haven investment along with other assets like Treasurys and sometimes cryptocurrency, analysts said the metal acts as a hedge against currency degradation as well at times when policymakers take strict actions to deal with massive economic shocks, such as the one currently happening due to the COVID-19 pandemic.

Along with equities, oil, and most assets, gold has been under tremendous pressure during the last couple of weeks. Like other firms, Goldman attributed this pressure to market participants facing “severe funding constraints” as risk markets nosedived, and they were compelled to sell liquid positions in gold and other commodities to generate cash for margin calls. The precipitous tumble in oil prices also led to a dearth in dollars in emerging economies, which could signify Russia’s central bank could transition from purchasing to selling gold, Goldman said.

All markets are also gaining traction from the prospect of a stimulus package being completed soon. In addition, President Trump is optimistic that markets will bounce back quickly from the coronavirus contagion that is devastating the economy, despite what analysts may believe to the contrary.

“At some point, we’re going to open up our country, and it will be fairly soon,” Trump said during an evening press briefing on the fast-spreading virus.

Goldman also saw the U.S. Federal Reserve’s Monday statement concerning enormous amounts of quantitative easing and other measures to bolster the economy and markets as a transformational.

“We believe that [Monday’s] announcement from the Fed for ‘open-ended’ QE reverses these funding stresses and offsets the negative impact on EM [emerging-market] wealth and are recommending buying December 2020 gold,” the report stated.

While gold was strong at the start of 2020, it has been suffering along with equities due to the coronavirus panic. But this will not likely last forever according to Goldman.

For the investor looking to use ETFs to play a run in gold, the  SPDR Gold Shares (GLD)  and the  SPDR Gold MiniShares (GLDM) are solid choices. Precious metals like gold offer investors an alternative to diversify their holdings, and like other commodities, gold will march to the beat of its own drum compared to the broader market.