You are at:Home»Thematic Investing Channel»Germany’s Inflation Might Be Higher, But This ETF’s Expense Ratio Is Still Low 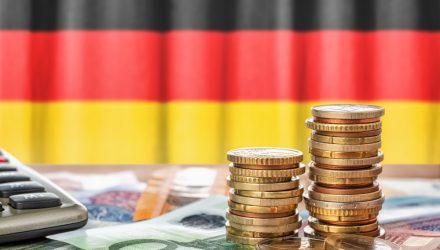 Germany’s Inflation Might Be Higher, But This ETF’s Expense Ratio Is Still Low

The rate of inflation might be heading higher in Germany, but getting single country ETF exposure to the European Union’s largest economy doesn’t have to be an expensive affair.

“Consumer prices, harmonized to make them comparable with inflation data from other European Union countries (HICP), rose 3.4% compared with 3.1% in July, preliminary figures from the Federal Statistics Office showed,” the article added further.

The index tracks the segment of the largest and most actively traded companies — known as blue chips — on the German equities market. Overall, DAX gives investors:

Challenges Ahead for New Government

This fall, Chancellor Angela Merkel will be leaving her position after 16 years in office. The new government installed later this year will face three primary challenges according to Goldman Sachs: climate change, an aging population, and trade frictions.

“We see Germany exposed to a number of medium-term challenges, related to the missed structural opportunities during the Merkel years,” Goldman analysts said in a CNBC article.

“The next government faces a balancing act between achieving the country’s ambitious climate goals and reaping the economic benefits from the green transition,” the analysts added further.

The changing political landscape will certainly be something to watch. As such, DAX is certainly a fund to keep on investors’ watch lists for the rest of the year.