You are at:Home»Thematic Investing Channel»General Motors Is Lauded For Coronavirus Relief Efforts 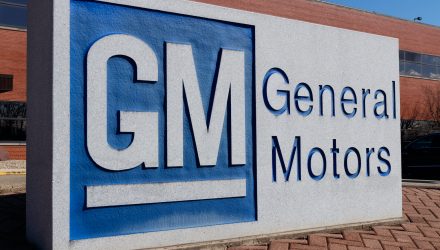 While most investors are familiar with the company’s auto-making prowess, General Motors is in the news recently for its decision to repurpose parts of two U.S. automotive factories under the Defense Production Act, to produce health-care supplies in response to the COVID-19 pandemic.

GM’s efforts, which have been both criticized and lauded by President Trump lately, include producing FDA-cleared Level 1 surgical masks at a manufacturing facility in Warren, Michigan, and Ventec VOCSN critical care ventilators at a components plant in Kokomo, Indiana.

Both projects are moving along speedily according to GM, including plans this week to begin generating surgical masks at the facility in suburban Detroit. Production of the ventilators, in partnership with Washington-based Ventec Life Systems, is anticipated to commence as soon as possible, with shipments beginning as soon as next month.

“This pandemic is unprecedented and so is this response, with incredible support from GM and their suppliers,” said Chris Kiple, CEO of Ventec Life Systems, in a release last week. “Healthcare professionals on the front lines deserve the best tools to treat patients and precision critical care ventilators like VOCSN are what is necessary to save lives.”

The president berated General Motors recently in a tweet, saying:

As usual with “this” General Motors, things just never seem to work out. They said they were going to give us 40,000 much needed Ventilators, “very quickly”. Now they are saying it will only be 6000, in late April, and they want top dollar. Always a mess with Mary B. Invoke “P”.

“Ventec, GM and our supply base have been working around the clock for over a week to meet this urgent need,” GM responded in a statement last week following Trump criticizing the automaker’s speed in producing the ventilators.

Then, just two days after beating GM’s response and a reported $1 billion cost to create ventilators for the government, Trump on Sunday praised the automaker twice for its efforts.