You are at:Home»Thematic Investing Channel»Future of Energy Shapes up Well For This ETF 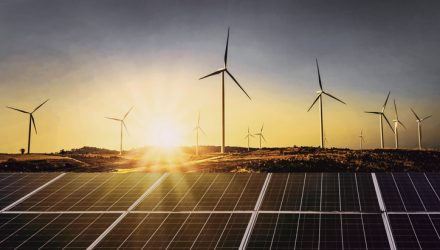 Future of Energy Shapes up Well For This ETF

In previous eras, coal and natural gas competed to be the top power sources, but that trend is shifting away from coal and has been for some time, to clean energy sources competing with natural gas.

“Coal and natural gas have been fighting for the top spot in the U.S. generation market for the last 20 years. In 2016, gas generation topped coal for the first time,” said Morningstar in a recent note. “Gas is the new king, with 35% market share. Now the battlefield is shifting, and in the next decade we expect natural gas and renewable energy, particularly solar and wind, to slug it out.”

“Renewable energy has been growing at extraordinary rates but still has just 10% market share,” said Morningstar. “By 2030, we forecast renewable energy to produce 22% of U.S. electricity generation, surpassing coal, nuclear, and hydro as the second-largest source of power generation in the U.S. We think gas will also be a winner because of its flexibility to support intermittent wind and solar, extending its market share lead to 41% over the next decade.”

ACES is at the right place at the right time. Not only is clean energy consumption increasing, but costs are also decreasing, which in turn bolsters adoption. Additionally, coal production is slumping, adding to the virtuous cycle for alternative energy ETFs.