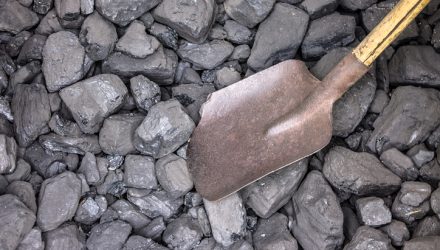 For The Daring, This Coal ETF Beckons

The coal industry has fallen on hard times and plenty of market observers are content to write obituaries for a business that was once a cornerstone of domestic power generation. Down more than 13% this year, the VanEck Vectors Coal ETF (NYSEArca: KOL) reflects investors’ somber attitude toward coal stocks.

In recent years, domestic utilities have been reducing the use of coal in favor of cheaper, cleaner-burning natural gas. Compounding woes for the U.S. coal industry are the declining costs associated with alternative energy sources, such as solar. However, some analysts believe coal stocks can rally, though the industry still faces significant long-term challenges.

“At a time when lithium-ion batteries and their applications are generating such attention, it is worth flagging that coal is, in all meaningful respects, a battery,” said Bernstein analyst Paul in recent note cited by Barron’s.

There has been plenty of talk about transitions to clean energy, such as solar and wind, and those moves are real, buoyed by declining costs to produce alternative energy and political momentum for the pursuit. That doesn’t mean coal is dead right now, though KOL’s price action may be reflecting a worst-case scenario.

Plus, coal stocks, including some KOL components, are cheap. Really cheap, but of course investors need to separate legitimate value from value traps.

“As for valuation, coal companies’ shares are effectively trading at 5 cents on the dollar, when looking at the ratio of normalized per-ton operating earnings to total firm value, Gait says,” according to Barron’s.

Related: A New Computing ETF Off To A Hot Start

There’s also some hope on the export for domestic coal producers.

“While coal’s dominance for domestic electricity production is waning, global demand for U.S. coal is increasing; in fact, the U.S. is a net exporter of coal,” said FactSet. “According to the EIA, in 2018 15% of U.S. coal production was exported to other countries, with exports reaching their highest level in five years. The U.S. exports both steam or thermal coal used to generate electricity, and metallurgical (met) coal, which is used in the steel-making process.”