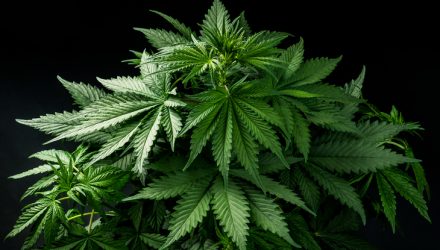 For Some Investors, Hope Springs Eternal With Cannabis ETFs

As has been widely reported, cannabis ETFs endured some rough performances last year. Just two days into 2020, the latest chapter in the marijuana ETF story has yet to be written, but funds such as the Global X Cannabis ETF (NASDAQ: POTX) showing signs of life.

For its part, POTX gained more than 1% last week. The first cannabis fund from Global X follows a benchmark that holds “companies involved in the legal production, growth, and distribution of cannabis and industrial hemp, as well as those involved in providing financial services to the cannabis industry, pharmaceutical applications of cannabis, cannabidiol (i.e., CBD), or other related uses including but not limited to extracts, derivatives or synthetic versions,” according to Global X.

Buyers gravitating toward funds such as POTX could eventually realize the benefit of a good time after the group’s 2019 tumble. Fortunately, some data points indicate investors are dedicated to marijuana ETFs.

“Instead of a ride straight up, they got the bust part of the cycle that often characterizes nascent industries. Yet U.S.-listed pot ETFs attracted $786 million in 2018 and another $720 million in 2019,” reports Bloomberg.

Investors embracing cannabis are making growth bets as well as wagers on increased legalization. For example, Illinois recently joined the fray of states where adult recreational cannabis is permitted and sales got off to a stellar debut.

“Although political and regulatory risks could put a damper on proliferation, many analysts are forecasting an uptick in sales in 2020. In Canada, sales could surge by 35% this year, while additional U.S. states may adopt pro-marijuana policies thanks to high levels of support,” according to Bloomberg.

Related: Investors Hoping For Change of Fortune For Cannabis ETFs

The legalized cannabis industry is also a nascent business with huge opportunities. New Frontier Data estimated that the consumer market value was nearly $344 billion in 2018, with Asia making up over half of that. There were also 263 million cannabis users globally over the past year.

Adding to investors’ devotion for cannabis ETFs, all of the new products in the category that debuted last year added money in 2019 despite rough price action by their components.