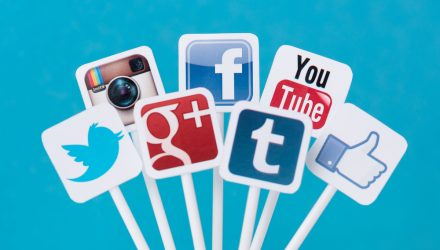 For All Its Troubles, Facebook Drives Social Media ETF Higher

For the month ending July 10, the Global X Social Media ETF (NasdaqGM: SOCL) jumped 17%, an impressive rally under any circumstances, but one made more so when considering the spate of controversy surrounding Facebook.

Integral the long-term social media thesis are factors including mobile penetration and large companies embracing social networking as an avenue for attracting new customers. Those factors and others are expected to lift average revenue per user (ARPU).

“Facebook is well insulated from advertiser defections, even with big brands like Coca-Cola, Unilever, and Starbucks pausing their spending. Facebook has eight million customers, mostly small and medium-size businesses, buying ads,” according to Barron’s.

Facebook has some avenues for dealing with controversy. Facebook, the largest social media company, recently provided some support to SOCL by announcing plans for forge into the fast-growing e-commerce arena. Facebook announced Facebook Shops, which will facilitate easier listing of products on Facebook and Instagram. Plus, Wall Street remains bullish on the stock.

“Wall Street estimates for Facebook’s 2020 sales and earnings have barely budged in the past month. In fact, its revenue outlook is slightly higher than it was at the end of May, before the boycott began. Analysts currently forecast Facebook to generate net income of $21 billion this year, or $7.30 a share, up 14% from a year ago. And they see $77 billion in revenue, up 9%, despite the pandemic,” according to Barron’s.