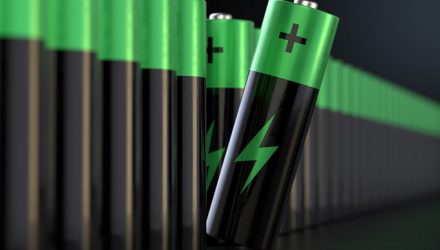 The Global X Lithium and Battery Tech ETF seeks to provide investment results that generally correspond to the price and yield performance, before fees and expenses, of the Solactive Global Lithium Index.

As Jaffe points out, LIT has been in the discussion for a while. The fund has been trending upward in terms of popularity. As Lydon notes, many have been looking at lithium because of its association with Tesla (TSLA). The company has put up some big numbers, following a period from a year ago when things seemed less promising.

Today, however, Tesla has shown exceptional performance, which tells investors and advisors sales have continued, which, in turn, means there’s a need for more batteries. So, LIT is an ETF specifically investing in companies that focus on lithium mining, lithium production, and battery production.

“It’s an ancillary way to invest in companies like Tesla,” Lydon states.

Having been around for a while (LIT celebrates its 10th anniversary this year), the fund has found itself in a strong position currently, which makes it a solid trend-following-based choice. Lydon adds how this is the case partially because of how the price of lithium doesn’t correlate with the price of Tesla, so like other miners, there’s a difference in how lithium operates.

With their own supply and demand issues, based on the variety of clients, it’s essential to understand the differences. That said, the variety in related funds also puts on the display the illustration of choice. The expanding reach of ETFs means individual investors are looking at sectors that may be on good growth trajectories.

“Many are feeling lately that lithium is going to get a lot of love in the future,” says Lydon.

In terms of how it looks in a portfolio, Lydon feels that, like any natural resource or any product, it (once again) has its own supply and demand issues. As an example, Lydon notes platinum and palladium, because it’s a big source for catalytic converters. Were they to find another metal or another substitute, the demand (and price) would suddenly fall off.

For lithium, a vital aspect of the material is how difficult it is to produce. The extensive processing will likely lead to improvements in the mining and technology to help bring the price down, if anything, which will, in turn, help to make it more available.

There are some electric vehicle companies in China, for example, that are going to be pumping out cheaper versions of Tesla. These will require lithium in their batteries, further showing how the demand will increase, and there will eventually need to be a way to adjust.

As Lydon adds, “There’s a lot of opportunities to invest. It’s always important to try to understand these thinly sliced areas of the market. Don’t just be on it because it feels like it’s great. And more importantly, watch the trends.”