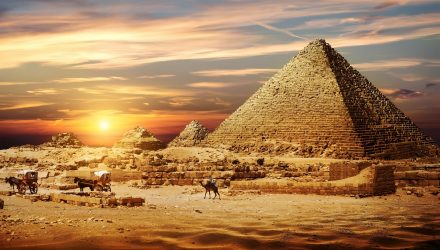 Egypt ETF Up More Than 19% YTD

The VanEck Vectors Egypt Index ETF (NYSEArca: EGPT), the lone US-listed ETF dedicated to Egyptian equities, is up more than 19% year-to-date, but until recently, the fund has not been getting much attention.

The Egyptian pound and falling inflation helped contribute to rising expectations that Egypt’s central bank would cut interest rates this year, which added to optimism among domestic and enticing investors, whom increased their holdings in Egyptian assets, Reuters reports. Investors are taking note.

“The VanEck Vectors Egypt Index ETF attracted $11.5 million in the five days ended March 8, more than any other week since September 2014. The assets under management climbed to $52 million,the highest since August. The U.S.-based fund invests more than 40 percent of its assets in real estate, chemicals and telecommunications shares trading in Cairo,” reports Bloomberg.

EGPT, one of this year’s best-performing single-country ETFs, holds just 27 stocks. Financial services stocks represent 30.3% of the fund’s weight while the real estate and materials sectors combine for over 34%.

“The flows show increased appetite for Egyptian shares by foreign investors. The EGX 30 has advanced 15 percent this year, recovering from a slump of 13 percent in 2018, as a surprise interest-rate cut last month adds to an improve in sentiment towards assets from emerging markets. The index is the second best performer among major gauges tracked by Bloomberg this year, behind only one in Shanghai,” according to Bloomberg.

“Egypt ranked first on a list compiled by Bloomberg that tracks ETF flows to different countries globally. The increase was of 20 percent, when measuring flows versus total assets targeting the country,” reports Bloomberg.