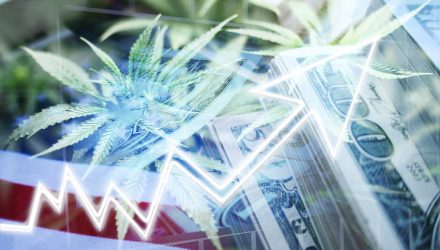 Earnings season is chugging along and at the industry level, Canadian cannabis companies are the next group to step into the earnings confessional in a big way with a slew of reports coming. That could put the Global X Cannabis ETF (NASDAQ: POTX) in play over the next few days.

“In mid-February, some of the largest Canadian LPs by market capitalization and/or revenue will report financials for the December quarter, including Aurora Cannabis, Canopy Growth, Cronos Group and Supreme Cannabis,” writes Alan Brochstein for New Cannabis Ventures.

Investors embracing cannabis are making growth bets as well as wagers on increased legalization. For example, Illinois recently joined the fray of states where adult recreational cannabis is permitted and sales got off to a stellar debut.

Canada is potentially one of the most lucrative marijuana markets in the world, but the country has some issues to work through before publicly traded producers there can truly benefit.

“We think this will be a critical quarter in some regards, as it will be important to show signs of better cost controls and at least stabilization of revenue after recent sequential declines,” according to Brochstein. “We expect the reports for the March quarter will look better than the December quarter from a revenue perspective, as the contribution from the new product formats that began shipping in December is likely to be immaterial but more substantial as this current quarter plays out.”

Canopy Growth (NYSE: CGC), the largest holding in POTX at 11.17% of the fund’s weight, could be the name that determines the fund’s near-term fortunes.

“The Canopy Growth call could set the tone for the overall market given its leadership position in revenue and market cap,” notes Brochstein. “This will be new CEO David Klein’s first time to address shareholders and analysts, and he could use the platform to announce major operational changes or to set expectations for the company’s next fiscal year, which begins on April 1st.”