You are at:Home»Thematic Investing Channel»E-Cigarette and Healthcare ETFs For Investors 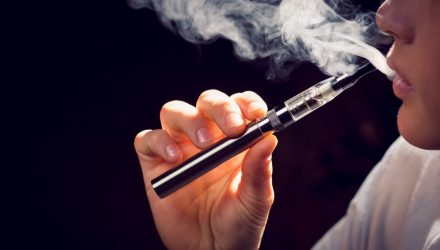 E-Cigarette and Healthcare ETFs For Investors

The electronic cigarette market is a burgeoning global industry that includes vaping, and is forecast to expand from less than $10 billion now to over $50 billion by 2025, causing many to consider investing in this trend. While this new and purportedly less harmful take on smoking has gained momentum, investors should be leery about jumping aboard the bandwagon, as recent news about the harmful effects of vaping has surfaced.

At least three people have died from a mysterious lung illness which doctors believe may be caused by vaping. The ailment has become a rising public health concern that has U.S. and state officials perplexed, the Centers for Disease Control and Prevention said Friday.

The CDC is cautioning people to avoid using e-cigarettes amid the outbreak, as a new patient in Indiana died, in addition to previously reported deaths in Illinois and Oregon. Ileana Arias, CDC’s acting deputy director of non-infectious diseases, told reporters on a media call that officials are investigating a fourth death.

“Until we have a cause and while this investigation is ongoing, we’re recommending individuals consider not using e-cigarettes,” said Dana Meaney-Delman, who is overseeing the CDC’s response. “As more information comes about and we can narrow down the specific e-cigarette products, we intend to revise that.”

While initial medical findings showed that patients had lung x-rays similar to individuals who had viral pneumonia, there did not seem to be a differentiation between the substance being ingested, and the illness could be more correlated with vaping itself.

“My stance is overall, as a lung doctor, I don’t want anybody putting anything into their lungs,” Dr. Dixie Harris, a pulmonologist with Intermountain Healthcare in Salt Lake City, who has worked on 24 cases in Utah said. “But I do think there is something going on and there is one common thing making all these lungs react.”