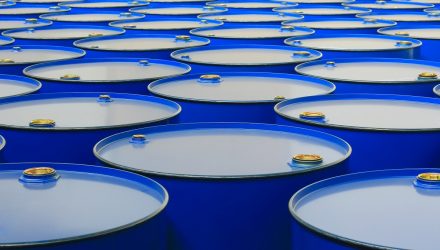 Oil prices are taking it in the teeth on Friday as crude oil dove more than 10% to multi-year lows, as OPEC’s allies denied additional production cuts proposed by OPEC on Thursday.

Down over $4.50 a barrel, West Texas Intermediate crude dropped approached $41, as stock markets continue to be roiled by the coronavirus. Oil plummeted to its lowest level since Aug. 2016. It was WTI’s worst day since Nov. 28, 2014. Earlier in the session, WTI traded down as much as $41.11 per barrel.

Meanwhile, the United States Oil Fund LP (USO) is also following suit, with the ETF down nearly 10.5%, while leveraged fund, VelocityShares 3x Long Crude ETN (UWT) is down a staggering 31%.

OPEC ministers had claimed on Thursday that the coronavirus outbreak generated an “unprecedented situation” that necessitated action, as measures to stop the virus spreading hampers global economic activity and oil demand.

Russian Energy Minister Alexander Novak said to reporters exiting the meetings in Vienna on Friday that it signified that members could now pump what as they pleased starting April 1.

“We have made this decision because no consensus has been found of how all the 24 countries should simultaneously react to the current situation. So as from April 1, we are starting to work without minding the quotas or reductions which were in place earlier but this does not mean that each country would not monitor and analyze market developments,” he said.
Like stocks, crude oil continues to sell off, moving towards a bear market according to experts.
“The OPEC+ confab is devolving into the worst-case scenario for the group. Last night, the best-case scenario for the group was touted: a cut of 1.5 million BPD through year-end. That scheme hinged on Russian participation, however, which is not forthcoming,” Again Capital’s John Kilduff said. “The group may now end up merely extending the current production scheme, with no additional cuts, and the market is punishing them for that potential outcome,” he added.
Like stocks, which notched their worst week since the financial crisis recently, the last time OPEC+ reduced supply on such a scale was back in 2008 when it took 4.2 million barrels per day off the market to support oil prices during of the financial crisis.
For more market trends, visit ETF Trends.