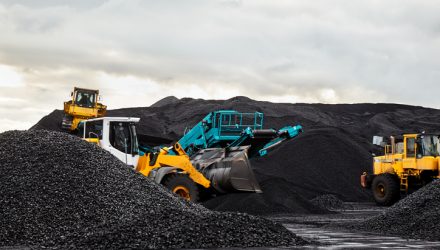 A Continuing Conundrum For The Coal ETF

As alternative energy sources have become less expensive and adoption is increasing, coal is suffering. For example, the VanEck Vectors Coal ETF (NYSEArca: KOL) is lower by 15.68% this year.

In recent years, domestic utilities have been reducing use of coal in favor of cheaper, cleaner-burning natural gas. Compounding woes for the U.S. coal industry are the declining costs associated with alternative energy sources, such as solar.

“The global usage rate for coal-fired generation this year is about 54% and suggests that electricity from the plants, which are built to run at or near capacity for extended periods, is more expensive,” according to a Carbon Brief study, reports Bloomberg.

In recent years, domestic utilities have been reducing the use of coal in favor of cheaper, cleaner-burning natural gas. Compounding woes for the U.S. coal industry are the declining costs associated with alternative energy sources, such as solar. However, some analysts believe coal stocks can rally, though the industry still faces significant long-term challenges.

“The global average utilization of coal-fired power plants is on track to hit an all-time low this year, affecting the profitability of both existing and planned capacity,” notes the Carbon Brief report cited by Bloomberg. “Such a low utilization rate also implies that the electricity they generate is more expensive, as capital costs are paid for by output during fewer running hours.”

There has been plenty of talk about transitions to clean energy, such as solar and wind, and those moves are real, buoyed by declining costs to produce alternative energy and political momentum for the pursuit. That doesn’t mean coal is dead right now, though KOL’s price action may be reflecting a worst-case scenario.

Additionally, coal stocks are among the cheapest in the materials sector, a sector viewed as a value play, but that may not be enough to lure investors.

“The drop is a result of several big U.S. plants shutting, a decline in India’s coal power generation and as output growth for the fuel in China slows, according to the analysis, which used power sector data for the first seven to 10 months of the year,” according to Bloomberg.