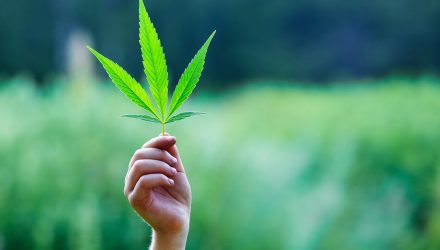 Ian Young July 3, 2019
After watching for years as individual U.S. states legalized marijuana one by one for various purposes, the entire nation of Canada took a giant leap forward by making recreational cannabis legal across the country in mid-October of 2018. Gradually, more jurisdictions across the globe have decided to eliminate laws against marijuana, and the movement seems to be gaining even more traction in 2019.

The good news for investors, is that with the rise of legal marijuana comes opportunity to invest in it’s business development. Pot stocks like Canopy Growth (CGC) and Aurora Cannabis (ACB) have grown increasingly popular among investors, but they’ve also seen a lot of volatility. Many companies in the cannabis industry saw their shares rocket higher during the incipient period of the the Canadian recreational market, only to give up their gains and see prices fall back to Earth in the months that followed. The experience taught many investors that rapid growth comes with risk, and that diversification can be a valuable asset when investing in a speculative space, such as the marijuana sector.

Canopy Growth is one such company where last month the pot giant reported a wider-than-expected loss in the fourth quarter. The loss took 20 cents per share, or nearly $39 million, coming out of Constellation’s own earnings. Constellation CEO William Newlands explained to analysts that while the company remains content with its investment and the long-term potential, it was “not pleased” with Canopy’s recent results.

Likely as a result of this shortfall, Canopy, the world’s largest publicly-traded cannabis company by market value, earlier Wednesday announced in a press release that it’s CEO Bruce Linton was removed as co-chief executive officer and a member of the board, effective immediately. Mark Zekulin, who had been co-CEO with Linton, now succeeds him as the sole CEO while the company searches for a replacement.

Linton, who claims he was fired, said on CNBC, “I think stepping down might not be the right phrase,” referring to the language in the company press release. “I was terminated.”

Canopy shares recovered their earlier losses, increasing 0.5% in morning trade, as analysts called the leadership shake-up the right move to assist the company in maturing and eventually becoming profitable.

“The magnitude of losses for [Canopy] has expanded far more than we had expected, and while we commend Linton for his vision in establishing the world’s leading cannabis company, we believe new leadership will be a welcome change,” Cowen analyst Vivien Azer said in a note to investors.

IQ Global Agribusiness Small Cap ETF (CROP), ETFMG Alternative Harvest ETF (MJ), and a variety of other ETFs are good places to park capital for investors looking to get involved with Canopy as it moves forward with a new leadership direction.