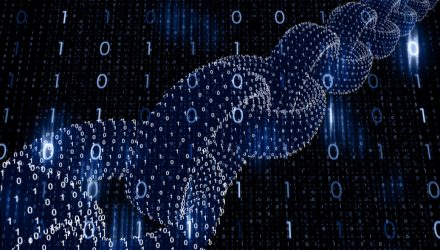 Betting On The Blockchain With BLCN

Bitcoin, the largest digital currency, is coming off an epic rally in May and while the king of crypto currencies has given back some of those gains this month, some blockchain-related exchange traded funds are performing well. That includes the Reality Shares Nasdaq NextGen Economy ETF (NASDAQ: BLCN).

BLCN tracks the Reality Shares Nasdaq Blockchain Economy Index. That index “is designed to measure the returns of companies that are committing material resources to developing, researching, supporting, innovating or utilizing blockchain technology for their use or for use by others,” according to Reality Shares.

For now, there are dichotomies surrounding the blockchain thesis, though for investors willing to take on some risk, the blockchain story remains compelling.

“Blockchain is the least mature of the six transformative technologies tracked by Digital Orbit,” said IHS Markit in a recent note. “Complex and largely confined in application to the financial sector, Blockchain together with 5G had the lowest scores in readiness, one of Digital Orbit’s two key measures. The low scores meant that both Blockchain and 5G were considered least likely for adoption by industry.”

Blockchain, the underlying technology that forms the basis for cryptocurrencies, has plenty of other real world uses. Blockchain itself has been a hot topic with companies like investment firm UBS looking to implement the transactional technology in the financial sector. Other industries are expected to be major adopters of blockchain.

“In healthcare, for example, Blockchain has the potential to resolve many long-standing issues, including the creation of a common health information database accessible to doctors and providers alike, regardless of the electronic medical system used,” according to Markit. “In the power and energy sector, Blockchain can provide a more efficient marketplace and reduce the chances of fraud in energy trading and process optimization. Blockchain can also enable automated management of the power grid, helping to protect against fraud in grid edge transactions.”

“The business value in 2018 of Blockchain across all industry verticals was estimated by IHS Markit to be worth $5 billion, of which 72% derived from the financial sector,” notes Markit.