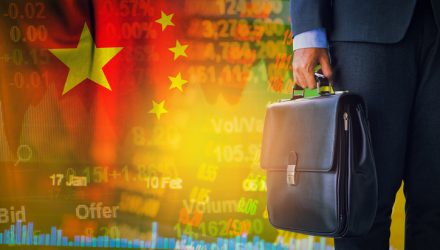 Believe It: Volatility Declines on Some China ETFs

Chinese stocks and the related ETFs usually aren’t the asset class investors think of when they look for low volatility investments, but some recent data suggest volatility on Chinese stocks is dwindling.

That could benefit ETFs, such as the VanEck Vectors ChinaAMC CSI 300 ETF (NYSEArca: PEK). PEK targets the CSI 300 Index, “which is comprised of the 300 largest and most liquid stocks in the Chinese A-share market,” according to VanEck.

Like the majority of emerging markets, China hasn’t been immune to the pangs of the market volatility within the last couple of months due to the U.S.-China trade war. While some investors may look at these equities as a possible value-oriented option, one analyst says to watch out for potential value traps. However, recent volatility on PEK’s underlying index has actually been lower than that of the S&P 500.

“Realized 60-day volatility in the CSI 300 Index of Shanghai and Shenzhen stocks fell to 14 at the end of last month, compared with 15.6 for the S&P 500 Index. China’s financial markets were closed for the first week of October,” reports Elena Popina for Bloomberg.

“While Chinese trading became subdued in the run-up to the 70th anniversary of the People’s Republic on Oct. 1, U.S. traders were gripped by concerns over a possible impeachment of President Donald Trump and weaker economic data,” according to Bloomberg.

Historical data indicates that, not surprisingly, Chinese stocks are usually more volatile than their U.S. counterparts, making it difficult to pinpoint for how long PEK will be subdued relative to the S&P 500.

“How long this current phase of relative calm will last is hard to tell. In the past decade, volatility in the CSI 300 Index has been on average 8.3 points higher than for the S&P 500,” according to Bloomberg.