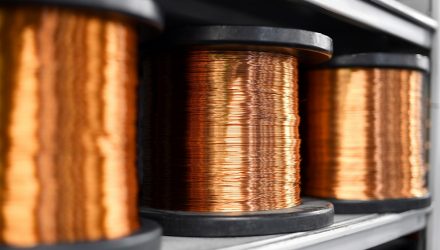 Battered Copper Prices Might Offer Investment Opportunities According To Analysts

Ian Young May 31, 2019
Copper was the first metal to be worked by people. Copper beads have been excavated in northern Iraq which are more than ten thousand years old, and presumably made from native copper, nuggets of which can sometimes still be uncovered.
Most copper today though is used in building construction, power generation and transmission, electronic product manufacturing, and the production of industrial machinery and transportation vehicles. Copper is an essential component in the motors, wiring, radiators, connectors, brakes, and bearings used in cars and trucks. The average car contains 1.5 kilometers (0.9 mile) of copper wire, and the total amount of copper ranges from 20 kilograms (44 pounds) in small cars to 45 kilograms (99 pounds) in luxury and hybrid vehicles. And, most notably, copper is a key component of electric vehicles (EVs), which are a notorious copper consumer.  EVs consume between three and four times the amount of copper as traditional internal combustion engines.

China, a country making headlines almost daily due to the trade spat, is leading the world in EV adoption, and will likely continue to do so for some time. In the fourth quarter of last year, China was responsible for 60 percent of global EV sales, according to Bloomberg, which adds that the country holds half of all vehicle-charging infrastructure. By the end of last year, electric cars made up about 7 percent of total new vehicle sales in China, with a compound growth rate of 118 percent since 2011. In about a decade, the Asian country will likely account for almost 40 percent of the global EV market, followed by Europe (26 percent) and the U.S. (20 percent), according to BNEF.

Analysts and investors alike are starting to become interested in the red metal, as it moves lower and becomes a potential bargain. While it is apparent that physical copper premiums have moved fundamentally lower, and the Chinese have overall been less interested, some analysts have felt that China’s downstream demand is in fact “not that bad” and in line with previous years.

In February of this year, Piyush Sood, lead analyst at Morgan Stanley, said in a note that Freeport’s “earnings sensitivity to copper is still the highest among its peers, and combined with its high trading liquidity, we believe it will emerge as the go-to large-cap stock for exposure to a copper price rally.” Shares of the Phoenix-based company’s stock jumped nearly 7 percent on the news last Wednesday.

Singapore-based DBS Bank also sees a copper shortage over the mid-term. Analysts expect supply to be in a deficit each year between now and at least 2022, when it could be at its widest since 2004.

ETF investors looking to gain exposure to the metals and mining space might look into miner-related ETFs, such as the SPDR Metals & Mining ETF (NYSEArca: XME), which is designed to track the broad metals and mining segment, and the Global X Copper Miners ETF (NYSEARCA: COPX), which takes a more focused approach to copper miners. The iPath Series B Bloomberg Copper Subindex Total Return ETF (JJC) also focuses on copper investment.