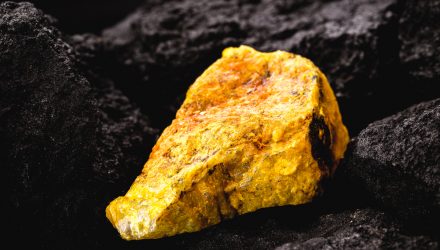 As More Countries Look to Nuclear Power, Give This Uranium ETF a Look

Russia’s invasion of Ukraine was a staunch reminder to the world that energy dependence on certain countries could have its downfalls. As such, alternate sources of energy like nuclear power will be under the microscope, opening up opportunities for uranium.

Prices for uranium have already seen elevated levels and other nations are starting to give nuclear power serious consideration. Take Britain, for example, which unveiled its own plan to achieve energy independence, which includes increasing the use of nuclear power.

“The cornerstone of Britain’s plan is an increase to nuclear capacity, with goals to deliver up to eight reactors this decade,” the New York Times reported.  “Under the energy security plan, the country will aim to increase its capacity to 24 gigawatts of nuclear power by 2050, or a quarter of estimated electricity demand. There will also be more oil and gas projects in the North Sea and an expansion of offshore wind and solar power. The government said it wanted to wean Britain off expensive fossil fuels.”

Taking a look at the World Uranium Index, one can see the demand spike for uranium as the world puts the past of nuclear power behind it. The Chernobyl disaster back in 1986 may have etched an unsightly picture of the dangers of nuclear power in the minds of those who were alive to witness it, but technology has been vastly improving.

Given its growth the last five years, an investment play on uranium is ideal should more adoption occur. That said, investors may want to give the Global X Uranium ETF (URA) serious consideration as a growth opportunity.