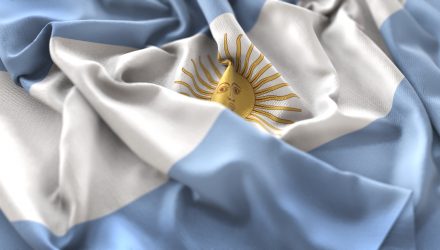 Argentina country-specific exchange traded funds bucked the general downbeat trend on Friday, climbing ahead of a tight presidential race with primary elections on Sunday to provide a signal on who might win in October’s vote.

This year’s primaries will be “a great orchestra rehearsal (for the Oct 27 election) in which we are going to see which instruments will play, which will play loudly and which will be silenced,” Luis Tonelli, a political science professor at the University of Buenos Aires, told the Washington Post.

More importantly for the equity market, observers are waiting to see whether or not the business-friendly Macri or center-left ticket of Alberto Fernández and Cristina Fernández will poll favorably on Sunday.

If no one takes the lead in October, there would be a November runoff.

However, the economy is currently suffering through high inflation, a plunging peso currency and 10% unemployment, which has weighed on Macri’s popularity.

A Fernández win could hit markets, according to Matías Carugati, chief economist at Management & Fit consultancy. “The closer Alberto (Fernández) is to 45% support, the more nervous investors will be, because that is the percentage that defines” a win in October, he said.