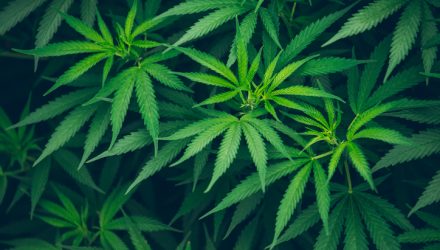 Get Ready, Another Cannabis ETF Lights Up

The universe of cannabis ETFs available to U.S. investors continues expanding. After a busy summer that saw three of these funds debut, taking the number of related options on U.S. exchanges to five, the highly anticipated Global X Cannabis ETF (NASDAQ: POTX) debuted on Thursday.

POTX’s underlying index holds “companies involved in the legal production, growth and distribution of cannabis and industrial hemp, as well as those involved in providing financial services to the cannabis industry, pharmaceutical applications of cannabis, cannabidiol (i.e., CBD), or other related uses including but not limited to extracts, derivatives or synthetic versions,” according to Global X.

The legal cannabis market in the U.S. is still in its formative stages. Roughly a quarter of the 50 states and Washington, D.C. have legalized marijuana for recreational purposes and almost half have legalized it for medicinal use. Recent data indicate many Americans support cannabis legalization.

The new POTX holds 24 stocks, including Aurora Cannabis (NYSE: ACB), Canopy Growth (NYSE: CGC) and Tilray (NASDAQ: TLRY). That underscores the point that POTX is heavily exposed to Canadian medical marijuana purveyors. However, POTX is positioned to take advantage of increased cannabis legalization in the U.S.

“As cannabis becomes legalized in additional countries and states, we believe the post-prohibition era is an apt comparison for the potential growth of the industry,” according to Global X research. “Searching for ways to boost economic growth and tax receipts, many governments are likely to consider taking a positive stance on legalization. Large established players with expertise and capital, are likely to take a commanding position in the global market, quickly entering new markets as they open and consolidating market share.”

Investors should also understand the different breakdown of the cannabis species. Some may have heard of terms like CBD oils, hemp, THC and marijuana. CBD is a non-psychoactive component while THC is psychoactive. Hemp is a species of cannabis with less than 0.3% THC while the more widely known marijuana contains 15% to 20% THC.

According to Arcview Market Research & BDS Analytics, legal global cannabis spending is expected to surge to $31.7 billion by 2022, compared to the $12.3 billion in 2018. Looking at U.S. industry growth, recreational and medical sales could surge up to $30.4 billion by 2023, according to the Marijuana Business Factbook.

“We believe that today’s leading companies in the cannabis space are well-positioned to capitalize on the expected future growth of cannabis in pharmaceutical, health & wellness, and recreational products,” said Global X. “As discussed earlier in this piece, the legal cannabis industry remains in its infancy, with an expected $14.9 billion in sales in 2019 relative to an estimated $166 billion total addressable market (TAM).”