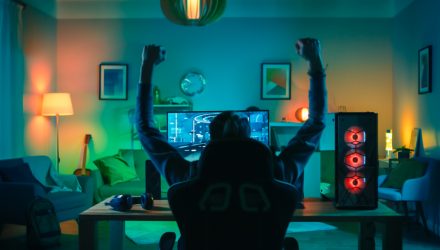 The explosion in popularity in the video gaming and e-sports industry was certainly at a fever pitch during the start of the pandemic, but the growth prospects of the industry show that it’s here to stay.

Various data compilers show that the industry is poised to continue its billion-dollar valuations. Statista, for example, sees the industry growing by over 20% before 2030.

“In 2021, the global eSports market was valued at just over 1.22 billion U.S. dollars and was expected to grow to a value of 1.44 billion in 2022,” a Statista report noted. “The market was forecast to reach a value of 5.48 billion in 2029, representing a compound annual growth rate of 21 percent during this period.”

COVID-19 has certainly had a hand in propelling the industry with government-mandated lockdowns and other public health measures. Gaming gave individuals an opportunity to maintain social interaction around the world.

“People were looking for ways to both entertain themselves and maintain their social connections,” said Bartosz Skwarczek, co-founder and CEO of online gaming shop G2A.com. “Gaming has so often been painted with the wrong brush – stereotyped as being isolating and unsociable. However, the pandemic has shown this could not be further from the truth.”

Capturing the Growth of E-Sports

Given the strong growth prospects of e-sports, one exchange traded fund to consider is the Global X Video Games & Esports ETF (HERO). Overall, the fund seeks to invest in companies that develop or publish video games, facilitate the streaming and distribution of video gaming or e-sports content, own and operate within competitive esports leagues, or produce hardware used in video games and e-sports, including augmented and virtual reality.

As mentioned, the pandemic has highlighted the strength of the video gaming industry as social distancing measures forced individuals to take on activities in the safe confines of their homes. That also promoted the competitive aspect of gaming to an audience who may not have been aware that e-sports exist.

“The pandemic accelerated the adoption of at-home entertainment options, with many turning to gaming and esports for the first time, broadening the theme’s reach,” Global X noted on its product website.

Competitive gaming is also a global phenomenon that’s exhibiting growth in all parts of the world. As such, HERO captures this diversification with exposure to companies in not just the United States, but also Japan, South Korea, and China, to name just a few.

“Gaming is increasingly a social medium, enabling the sharing of virtual experiences and interaction with friends and strangers around the world,” Global X added.