You are at:Home»Thematic Investing Channel»Aerospace ETFs Fall Amid Decline In Boeing Deliveries 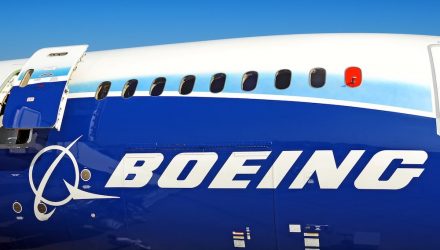 With much of the broad market slipping for the second day in a row ahead of the FOMC meeting Wednesday, Boeing is helping to catalyze that fall, with the stock dropping by 6%, amid losses yesterday after its May orders and deliveries report was released, and analyst comments.

Boeing delivered just four airplanes in May, down from only six in April. That’s the lowest total for a month in more than half a century, and off by 87% from May 2019.

In addition, none of the deliveries involved a passenger airplane. Three were freighters, and the fourth was a 737 NG converted to the sub-hunter P-8 Poseidon. The company has thus far delivered just 60 commercial crafts in 2020.

Boeing reported order cancellations of an additional 18 planes last month, including 14 of its 737 MAX jets. Last year, the U.S. aerospace company cut production of the MAX jets after a second crash. It recently restarted production of the jets at its factory in Renton, Washington at a reduced level.

Analyst Cai Rumohr at Cowen & Co said that he blamed the “very weak” deliveries in May on coronavirus closings and curbing of flights. Rumohr reiterated his Hold rating on the stock with a $150 price target.

Despite the bad news, Boeing’s stock has rallied over 50% since the end of May, as the country reopening the economy has been seen as bullish for the airline industry.

Boeing was scheduled to lay off more than 6,000 employees last month as the coronavirus pandemic has been wreaking havoc the air travel and aerospace industries for months.

The aircraft manufacturer previously said it is looking for ways to slash its staff by 10% through voluntary and involuntary separations from the company. Boeing said in its 2019 annual report that it had over 160,000 employees.

“Following the reduction-in-force announcement we made last month, we have concluded our voluntary layoff (VLO) program,” CEO Dave Calhoun said in a note to employees. “And now we have come to the unfortunate moment of having to start involuntary layoffs (ILO). We’re notifying the first 6,770 of our U.S. team members this week that they will be affected.”

Thousands of other employees will be notified if they are to be released over the next few months and 5,520 other Boeing employees have already been ratified for voluntary separations, Boeing said.

“I wish there were some other way,” Calhoun said. “For those of you who are notified, I want to offer my personal gratitude for the contributions you have made to Boeing, and I wish you and your families the very best.”

It’s not all bad news for the stock, however, as analysts are cautiously optimistic on the stock, with nine Buys, eleven Holds, and one Sell rating on the platemaker, giving Boeing a Moderate Buy according to a tipranks.com analyst consensus, with the $177.89 average analyst price target reflecting 18% downside potential in the shares over the coming year.