You are at:Home»Thematic Investing Channel»A Rookie ETF That Could Be A Winner 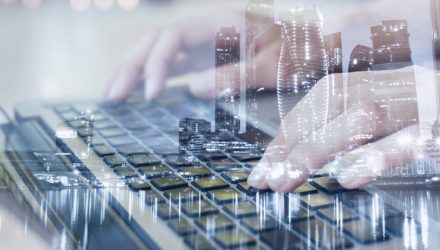 A Rookie ETF That Could Be A Winner

Global X recently expand its robust lineup of thematic ETFs in significant fashion with the addition of three new products. Included in that trio was the Global X Cybersecurity ETF (Nasdaq: BUG).

While BUG faces some competition in the cybersecurity ETF arena, the new fund could benefit from good timing because cyber attacks on corporations aren’t slowing down, nor is corporate spending aimed at defending against those breaches.

Concerns over online security and cybercrime have reached an all-time high, with the cost of damages from these activities expected to cost $6 trillion annually by 2021. Designed to track the Indxx Cybersecurity Index, the Global X Cybersecurity ETF holds a basket of companies that could benefit from increased adoption of cybersecurity technology, including companies whose principal business involves developing and managing security protocols to prevent intrusion and attacks on systems, networks, applications, computers, and mobile devices.

BUG could potentially prove to be a “right place, right time” ETF.

“In addition to the 141 percent increase in overall budgeting since 2010, cybersecurity spending has increased around the world and across industries,” according to the RSA Conference. “In 2019, worldwide spending on information security products and services is estimated to reach over $124 billion.”

Hacks, data breaches, and other cyber-enabled crimes have increased in frequency, fueling the need to take steps to protect oneself when using the Internet, according to the FBI. As a result, the cybersecurity investment theme has also taken on increased prominence.

“One of the interesting points about cybersecurity ETFs, including the rookie BUG, is that although the industry has experienced exponential growth in recent years, its dedicated components don’t have significant penetration in traditional technology ETFs. For example, the number of overlapping constituents between BUG and the S&P 500 Technology Index is just two, according to the ETF Research Center,” reports Nasdaq.

Given the greater attention to cybersecurity and the growing industry in an increasingly digitized age, investors can capitalize on the growth potential through sector-specific ETFs, including BUG. BUG is mid-cap ETF with a median market value of $4.4 billion among its 31 components, giving investors a growth profile in a fast-growing niche.

“As experienced cybersecurity investors know, central to this segment’s thesis is spending by corporate information technology managers. While some recent data points indicate overall corporate IT spending will experience sluggish growth this year, that’s not the case in the cybersecurity realm,” notes Nasdaq.