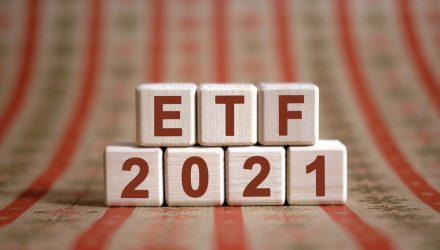 The Most Interesting New ETFs of 2021

I’ll be honest, I was planning on writing up a “year in review” kind of piece, as I’ve done pretty much every year for the last decade, but the reality is that too much happened this year, and I already write long, so I’m going to break it up this time. First, let’s look at the new hotness in 2021 — funds that launched into the teeth of Meme stock insanity, NFT mania, the race for vaccines, and the rise of post-capitalist “Squid Game” internet culture.

All told, 461 new ETFs came to market in the 12 months prior to this article, while just over 100 closed, leading to the biggest open/close ratio I can recall in the past decade or so. This brings the total to over 2,700 different flavors of ETFs, with over $7 trillion in assets and more than $800 billion in new money just this year.

This year, much of the product that came to market is fantastic: low cost, liquid exposure to everything from space to Asian bonds. But here are the five funds that I think are the most interesting. That doesn’t mean I’d put my money in ’em or that they’re only going to go up. I just think they’re doing something unique and cool. So here, in launch-date order, are my top six for the year:

Talk about timing! INFL launched in the second week of this year and went on two significant asset-gathering romps, one in the spring and one in October, both windows where the media narratives followed the short-term data and made a lot of noise about inflation. All told, the fund has pulled over $800 million in 11 months into a portfolio of global equities picked for their sensitivity to inflation.

INFL is hardly the only fund that captured investors’ inflation-fear dreams: TIPS products as a class have pulled in almost $40 billion in new assets in 2021 so far. That is by far the biggest year on record. Broad-based commodities products like Invesco’s Optimum Yield ETF (PDBC) pulled in $8 billion. Inflation was an important story, and INFL anchored the narrative all year long. Plus, with a name like “Horizon Kinetics,” you’re either breaking new investment ground or launching an attack on Cyberspace in a William Gibson novel, so what’s not to love?

Sometimes I just have to hand it to scrappy mid-tier ETF issuers like Van Eck. In the absolute teeth of the meme stock insanity that dominated headlines in the first quarter of 2021, someone on their team was negotiating with noted media-clown-turned-investment-streamer Dave Portnoy. They concocted an index that invests in the buzziest stocks each month based on scraping social media with an AI. Today, that portfolio has a lot of buzzy big tech names and decent slugs of /r/WallStreetBets favorites like Gamestop, AMC, and Palantir.

Is this a good investment idea? Who knows. Is it a brilliant victory for VanEck’s business development, operations, and marketing team? Absolutely. The inclination is to chuckle, I get it, and sure, the fund is down 4% since inception (vs. up 24% for the S&P 500), but the reality is, meme stocks are really a thing now, whether you want to be in ’em or short ’em or just be able to talk about ’em to your clients.

On this week’s Podcast when Nate Geraci asked for my favorite new ETF, I jumped at $VOTE really without thinking. The index it tracks, and thus the core exposure you’re getting as an investor really isn’t that interesting. It’s based on the Morningstar US Large Cap Select Index, which is just their version of the top 500 stocks in the U.S. It’s perfectly fine exposure for 5 basis points. What makes it interesting is that the issuer, Engine No. 1 (great name), takes stewardship VERY VERY SERIOUSLY.

They made headlines before the launch of the ETF by successfully winning two board seats on Exxon Mobile’s board for their sister hedge fund. The fund quickly became a darling of Betterment’s and is now included in their ESG portfolios. While it was a big year for ESG, VOTE gets my (cough) Vote for the most interesting take on the idea yet on putting your money where your mouth is, or in this case, your mouth where your money is.

Okay, a bit of cheating — DFUS and its three brethren funds are not new. But it is a new ETF. Dimensional has been part of a wave of mutual conversions we’ve seen this year, but these four funds are perhaps the most interesting. Not only can every investor now get access to the much-storied Dimensional almost-indexing approach to managing money by moving to an ETF wrapper, the median fund dropped its expense ratio a whopping 10 basis points. All told, Dimensional went from being a non-player just a few years ago to a $35 billion powerhouse.

Conversions are here, they’re only going to accelerate, and they are rapidly changing the nature of the ETF market. I expect a bunch more conversions in the coming year, although the considerable caveat remains: ETFs are still a poor fit in most retirement plans, and thus I don’t see Mutual Funds disappearing anytime soon. But for taxable accounts? This year’s flows are pretty definitive for the traditional mutual fund structure: Convert if you can, or get out of the way.

It’s understandable if everyone has a bit of crypto exhaustion after the last 12 months, but this launch from RoundHill and partner Matthew Ball was incredibly well-timed and well constructed. I’ve written (probably too much) about the Metaverse, Web3.0, NFTs, and crypto this year because I genuinely believe tokenized asset management is inevitable, and we should all pay attention. But back on planet earth, the team here has put together the best-researched portfolio covering the space you’re likely to find. It’s not the only game in town — products from Bitwise, VanEck, First Trust, Amplify, and others are tracking different versions of how the crypto-economy is evolving.

What sets META apart is two things. First, there’s the partnership with Ball, whose Metaverse Primer is the core framework that almost everyone in the investment space is using to categorize and make sense of these evolving internet, media, entertainment, hardware, and social innovations. And second, the fact that Facebook decided to literally change their name to the fund’s ticker a few months later. I don’t know whether Roundhill got a call from Zuck offering fat stacks of loot for the ticker, but boy, I wish I did. Regardless, the “Metaverse” is a terrible name for a very real future we’re running at fast, so paying attention is the minimum safe bet.

It may not be the physically-backed bitcoin ETF we all hoped we’d see this year. However, after SEC Chairman Gensler commented that only futures-based 1940-Act products would have a chance of passing SEC muster, the pros at ProShares submitted filings for mutual fund and ETF versions that simply got across the finish line faster than anyone else, beating a half dozen fliers of similar products to market. In just two days, the immediate demand pushed more than $1 billion into BITO, giving it the crown for the fastest organic run to $1 billion in ETF history.

More importantly, however, the fact that we’re barely even talking about it anymore is a good sign. BITO and similar launches from Van Eck and Valkyrie are all just working as expected, with tight spreads and, in the case of BITO, a robust options market. In other words, everything is just sort of working the way it’s supposed to. I’m not going to defend futures vs. spot — I think most investors and traders would prefer a spot ETF. I’d prefer to eat chocolate-covered marzipan for every meal, too. I’m learning to live with the disappointment.

But What About Boring?

While these may have been the most entertaining and stimulating ETFs to launch this year, they really only hit two core themes that drove the year: inflation and innovation. The fear of the former and the quest for the latter were important, but it’s worth noting that a lot of the assets this year didn’t go into either of those buckets. This year, the top 10 asset gatherers are about a third of the year’s entire flows, and they’re all cheap and boring: SPY, VTI, IEFA. Indeed, the most unusual ETF in the top 10 asset gatherers is probably just the plain Invesco QQQ.

This is a good thing! As we welcome all these new investors into the ETF fold, it’s important to remember that being boring is often the best long-term strategy. Most advisors I talk to at least default their clients into surprisingly boring portfolios. Maybe they have an area they focus on for a little secret sauce — a factor tilt, a sector strategy, a hot new theme they’re well-read on, but the core? Cheap and dull. So, check out some of the new hotness above, but, as always: Know what you own and why you own it.