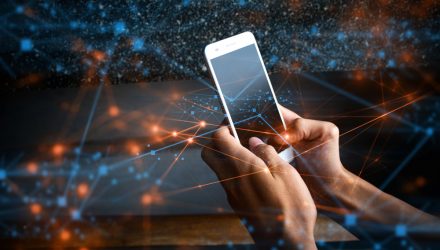 Meanwhile, AT&T shares advanced 7.7% and broke back above their long-term resistance at the 200-day simple moving average. AT&T makes up 9.2% of JHCS’s underlying portfolio, 4.6% of FCOM, and 4.6% of IYZ.

On Friday, the company completed its planned separation of the film and TV empire into a new publicly traded company called Warner Bros Discovery, the Wall Street Journal reports. AT&T shareholders will receive a 71% piece in the new entity.

Looking ahead, AT&T CEO John Stankey said that the company will refocus on its core business and outlined that inflationary pressures could push the wireless and broadband provider to raise prices on some core services while cutting costs after exiting the media business.

The company has been adding and keeping customers on its wireless program for over a year through offering aggressive promotions on new smartphone contracts. Meanwhile, the wireless provider is eyeing increased fees after the average rate that U.S. cellphone carriers charged for wireless services barely moved while inflation raised across the board.

Stankey argued that the company has room to raise prices to reflect the value of its services if inflation continues unabated.

“You’ll probably start to see it over the next several quarters, not just telecom—more broadly in the economy because of the patterns that we’re seeing,” Stankey told the WSJ.

Stankey also believes that the company is better positioned for a potential economic downturn, which could make it attractive to investors searching for a business that could better weather such a slowdown. Some surveys reveal that consumers see cellphone service as an essential services, similar to utilities, and are willing to cut back on other household expenses before they touch their phone bill.