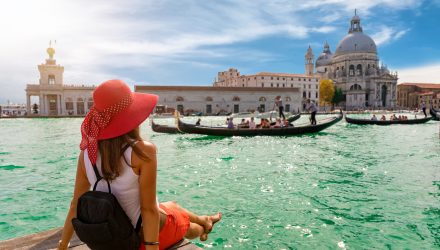 The iShares MSCI EMU ETF (Cboe: EZU) is among the Europe exchange traded funds struggling this year. Year-to-date, the $9.52 billion EZU is lower by more than 6%.

“The underperformance in EZU may have been pronounced last week, but it certainly wasn’t a new development. The fund’s rally attempts in mid-June and late July were curbed by emerging resistance at its formerly supportive 200-day and 320-day moving averages, respectively. And since a June 18 bear gap into negative year-to-date territory, EZU has been unable to claw its way back into the green for 2018,” according to Schaeffer’s Investment Research.

EZU, which tracks the MSCI EMU Index, holds 251 stocks. Approximately 63% of the fund’s geographic weight is allocated to France and Germany, the Eurozone’s two largest economies. That also makes EZU vulnerable to an ongoing trade spat between Europe and the U.S.

The U.S. already placed tariffs on European steel and aluminum, and the European Union has responded with tariffs on many U.S. products, with Harley-Davidson motorcycles and bourbon among the most prominent products on the hit list. On a technical basis, EZU currently looks oversold.