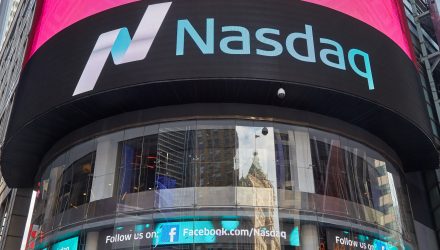 All three major stock benchmarks and relevant index ETFs finished the day higher on Monday as Amazon shares boosted other key tech stocks and the Nasdaq, which was catapulted toward the new highs seen last week. Meanwhile, mounting coronavirus cases were offset by optimism over potential vaccine developments.

The S&P 500 gained 0.8%, reaching green territory for the year, with a 0.6% gain. The Nasdaq Composite was the leader of the three bellwethers, climbing 2.5%, while The Dow Jones Industrial Average struggled throughout the day with losses, but managed to eke out gains into the close.

Tech stocks were once again on fire on Monday, as online retail giant Amazon climbed 7.9% to notch its best day since December 2018 following news that a Goldman Sachs analyst increased his price target on the stock to $3,800 per share, the largest target on the Wall Street. Social media behemoth Facebook and streaming titan Netflix advanced more than 1% each, while Apple and Alphabet rallied 2.1% and 3.1%, respectively, while tech king Microsoft jumped 4.3%, helping to lift the First Trust NASDAQ-100 Equal Weighted Index Fund (QQEW) 1.56%.

The move higher in tech provided some consolation for investors who were wary that the sector could be exhausted, following significant losses last week. Analysts and financial pundits assented.

“If we lose [technology’s] leadership in a meaningful way, I think it will adversely affect the overall market,” said Douglas Busch, founder of ChartSmarter, in a note. “If the sector can just take a rest, and keep in the middle of the pack akin to a smart jockey that has a lot of horse under him in a thoroughbred race, then it will likely see a surge again into the fall.”

Coronavirus cases have been rising at a frightening pace to the point that now more than 3.7 million cases exist in the U.S., according to Johns Hopkins University. The rapidly disseminating virus is causing lawmakers to commence negotiations on new stimulus measures.

Earlier this year, President Trump signed a stimulus package worth approximately $2 trillion which increased unemployment benefits for those laid off during the coronavirus pandemic, including a $600-a-week check for recipients that is set to expire later this month.

“There is a lot of uncertainty about the size and shape of the next bill, particularly on the consumer side,” said Aneta Markowska, Chief Financial Economist at Jefferies, in a note.

“We believe consensus expects a roughly $1-$1.5[T] package, so if the draft comes in on the high-end of that range, it would be seen as a positive surprise,” Markowska added. “In light of the deteriorating growth momentum, it is highly unlikely that Republicans under-deliver, which means that risks are skewed to the high side.”