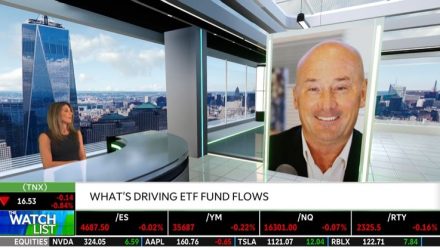 This year, ETFs have been performing beautifully, with lots of flows earning record numbers. ETF Trends’ CEO Tom Lydon was on hand to discuss these high flows, inflation, the bitcoin ETF, and more with TD Ameritrade’s Nicole Petallides.

As far as the trends out there, Lydon points out how Americans are not only buying but also adding to their portfolios. Compared to last year, investors are putting more into the equity side, with more concern coming from fixed income. This is due to the presence of inflation and rising rates, which are not suitable for the bond side of the portfolio.

“We’re surveying advisors all the time,” Lydon adds, “And inflation is the number one concern.”

Money is shifting to the short duration side, and even cash, as demonstrated by the record $7 trillion seen in money markets today, while the benchmark for the Barclays Aggregate Bond Index is down 4.5%. So, there’s more concern about the bond market among the advisor community than the equity market.

The advantage comes from seeing this increase in flows and having notable figures such as Cathie Wood go from $5 billion under management to $55 billion thanks to all the work in investments. Last year, the FAANG stocks were challenged because they couldn’t keep up with the work-from-home stocks. In 2021, it’s way different.

As Lydon explains, “The highs that we saw from the work-from-home stocks in February are still coming off those highs, but the FAANG stocks, the heavy cap-weighted stocks that are seen on major market indexes like the S&P, continue to push higher where we’re in breadths of all-time highs.”

Regarding where to put more cash to work for investors unsure, Lydon states how younger investors should really take the buying opportunities presented rather than fear what may happen. Dividend-oriented plays along with enhanced income and alternative income strategies such as energy or options overlay have kicked off excellent yields. Meanwhile, the fixed income side of the market may be the most dangerous part of the market on the balance sheet.

“There’s a lot of choice on the ETF side, as we just crossed $7 trillion and a record $750 billion in new money this year,” Lydon adds.

Commodities have attracted flows too. All commodity assets classes have advanced, and, surprisingly, gold has been the worst performer of the group and has seen net redemptions year-to-date.

At the same time, the plans for a bitcoin ETF have continued to proceed as predicted in a successful run so far. BITO, the first bitcoin-related fund launched by ProShares, reached over $1 billion in a matter of days, which is impressive.

As far as where it goes from here, Lydon states, “There are a whole slew of investors out there who would like to buy bitcoin via their Schwab account or their Fidelity account or their TD account, and it hasn’t been available. Now, in the futures wrapper, many are hoping there will be a spot bitcoin ETF accepted by the SEC as we get into 2022.”