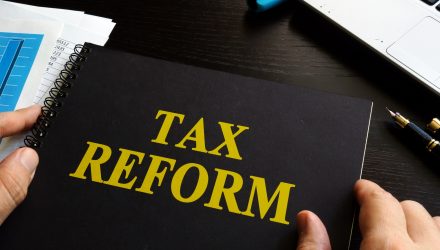 Smaller companies are seen as beneficiaries of tax reform. Tax reforms could also support smaller companies pressured by a weaker dollar. Small-cap earnings lagged behind the 10% jump for large-caps.

“The Russell 2000 has appeared to move in tandem with the perceived likelihood that tax reform will pass through both houses of Congress, said Matt Maley, equity strategist at Miller Tabak , a chart-minded strategist, reports CNBC. “The Russell 2000 sold off in October, when ‘many pundits said the tax reform proposals were ‘dead on arrival’ shortly after they were made public,’ he wrote.”

One issue for ETFs such as IJR and IWM is that markets may have already priced in the impact of tax reform on small-caps, leaving these stocks and ETFs vulnerable should the White House’s tax reform efforts fail.