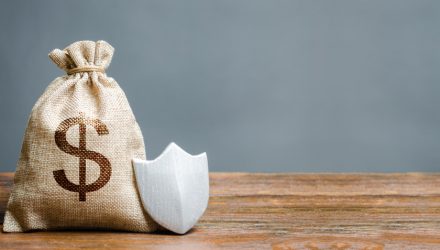 Inflation continues its upward trend, and while plenty of experts expect rising consumer prices will ebb next year, many of them thought that inflation would be transitory. Go figure.

While pinpointing exactly when inflation will ease is likely a fool’s errand, investors should be evaluating assets that offer inflation-fighting qualities. Moreover, they should also look for characteristics indicating a solid long-term thesis regardless of inflation. The VanEck Vectors Morningstar Wide Moat ETF (MOAT) checks those boxes.

During inflationary times, it pays to own stocks with pricing power. Real estate is one sector that has such power. Consumer staples, MOAT’s fourth-largest sector weight at 11.7%, is another.

“So there’s actually three wide-moat companies that I’d highlight that I think are both undervalued and have strong pricing power. So first is Anheuser-Busch InBev (BUD), which I would also note is one of the only 5-star stocks or one of the few 5-star stocks that we have left trading here in the U.S. And then the other two I’d highlight are Constellation Brands (STZ) and Coca-Cola (KO),” says Morningstar analyst Dave Sekera.

Beer giant Anheuser-Busch InBev isn’t one of MOAT’s holdings, but Dow components Coca-Cola and wine and spirits behemoth Constellation combine for about 3.6% of the ETF’s roster.

Another sector chock full of high-quality companies with wide competitive moats and ample pricing is technology. Microsoft (NASDAQ:MSFT), MOAT’s third-largest component, is a prime example of a quality tech outfit with inflation-fighting capabilities.

“I don’t see Microsoft will have any problem putting through price increases there to cover the costs for increased semiconductor costs. Now, Microsoft has also been implementing price increases this year, and those have stuck and have helped boost earnings,” adds Sekera.

E-commerce leader Amazon (NASDAQ:AMZN) and Meta Platforms (NASDAQ:FB), the company formerly known as Facebook, both of which are MOAT member firms, are two more examples of wide-moat names with the goods to help investors deal with hot inflation.

“Based on Amazon’s size, they will be able to exercise significantly more purchasing power and better supply arrangements than most of the traditional retail competitors. And I think that’ll be especially important this holiday season as we’re already hearing about the lack of inventory across many other retailers. We think Amazon is undervalued and currently rate the stock with 4 stars,” concludes Sekera.

MOAT is up 26% year-to-date and closed near an all-time high last Friday, indicating that inflation isn’t derailing the fund.