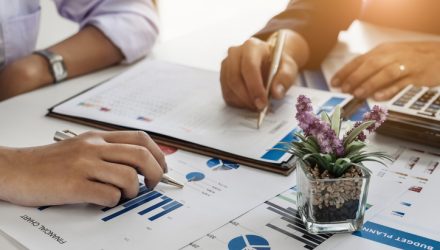 Why Financial Services ETFs Are Worth a Look For Traders

The Financial Select Sector SPDR (NYSEArca: XLF), the largest financial services ETF, and rival funds are under pressure, but that could also mean the S&P 500’s third-largest sector is worth a look for tactical traders.

Market observers have previously warned that Wall Street banks could face pressure as tepid market volatility could have contributed to more muted trading desk activity. Furthermore, the Federal Reserve has signaled its intentions to cut interest rates, which would further hurt the banking industry’s ability to generate profits from lending. However, some investors believe some of XLF’s marquee components could actually benefit from lower rates.

Reasons To Consider FAS Or FAZ

“However, with August in the rearview, traders might benefit from taking a closer look at exactly where the financial sector stands after the recent sell-off. In fact, in the midst of all the trade war and global recession fears, earnings reports from the big banks revealed an industry still rolling along at a steady pace,” said Direxion in a recent note. “While not a blowout quarter for any of them, major financial institutions, including JPMorgan Chase, Bank of America, Wells Fargo, and Citigroup each posted second-quarter top- and bottom-line results above analyst estimates. Peppered in these reports are clear signs that borrowing and liquidity remain in demand. Overall lending was up on a year-over-year basis by 2-4% for Bank of America, Wells Fargo, and JPMorgan. At the same time, credit card concerns like Visa and Mastercard grew their YoY sales by 11.5% and 12% respectively.”

One thing to consider is that U.S. banks generate massive percentages of their revenue and earnings on a domestic basis, indicating the group has been perhaps unfairly battered as the broader market has declined due to trade tensions. That indicates the group has been disappointing recently and is reacting to lower interest rates, potentially making FAZ appealing.

“But, with three more meetings planned for 2019 and an undefined course for exactly what the Fed is doing with prevailing rates, big bank investors need to contend with whether the current evidence on the financial sector’s core business strength can weather the equity market’s anxiety around business growth, global trade and whether the next recession is a few months, or years away,” according to Direxion.