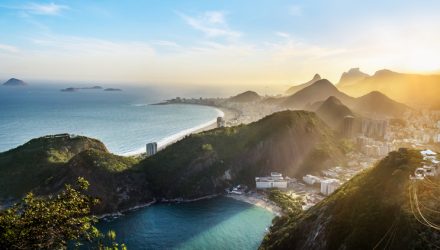 Where to Find Sizzling Small Caps

Consider the VanEck Vectors Brazil Small-Cap ETF (NYSEArca: BRF), which surged more than 31% last year and jumped another 2% on Thursday. BRF’s 2019 showing was undoubtedly impressive, but there could be more in store for Brazilian small-cap stocks in 2020.

“Small-cap funds were the most profitable type of equity investment fund in the 12-month period ended in November 2019: 40 percent, according to the most recent data released by the Brazilian Association of Financial and Capital Market Institutions (ANBIMA),” reports The Rio Times.

Investor sentiment for Brazilian assets has grown more bullish as the country’s central bank is largely expected to cut the already record-low interest rates in light of the slower-than-expected economic recovery and moderate inflationary pressures. Brazil’s central bank has been active in cutting interest rates, which has boosted stocks but depressed the local currency, the real.

BRF, which holds 66 stocks, is highly levered to a recovery in the Brazilian economy, Latin America’s largest. The fund devotes almost 23% of its weight to consumer discretionary names and nearly 20% of its combined weight to materials and technology stocks, all of which are cyclical sectors.

Brazilian small caps “privilege securities of amounts deemed low in the stock market, with a capitalization ranging from R$300 million (US$75 million) to R$2 billion. The stock portfolio consists of at least 85 percent of these shares, which are not listed among the 25 largest companies that make up the IBrX index,” according to the Rio Times.

Additionally, investors don’t have to pay up for the privilege of owning Brazilian small caps as BRF has a lower price-to-earnings ratio than the major U.S. small-cap benchmarks.