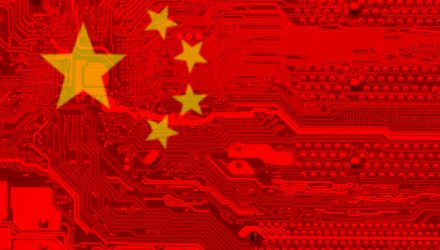 What’s Next For This China A-Shares ETF?

The Xtrackers Harvest CSI 300 China A-Shares ETF (NYSEArca: ASHR), one of the premier US-listed exchange traded funds tracking China A-shares, is up 5.53% over the past month, indicating the fund is benefiting from cooling trade tensions between the U.S. and China.

“ASHR was one of the prime beneficiaries of the U.S.-China ‘tariff truce’ rally that gave stocks a shot in the arm on July 1,” according to Schaeffer’s Investment Research. “Shares of the exchange-traded fund (ETF) gapped higher and ended the session up nearly 3% — racking up their best daily gain since June 20, when ASHR vaulted to a gain of 3.3% on global optimism over a dovish U.S. Fed statement.”

“In the wake of those two big bull gaps over the last few weeks, ASHR is now positioned firmly above a trio of moving averages that have each played a significant role in the recent past,” said Schaeffer’s. “First, since its lofty two-month intraday highs of July 1, the ETF has pulled back to find emerging support at its 60-day moving average. Previously, this trendline — which roughly corresponds with about three months’ worth of trading activity — had served as a stiff layer of resistance for ASHR during the bulk of its 2018 decline, until it was finally surmounted in mid-January of this year.”

“Adding to potential support in the area, the 320-day moving average for ASHR is currently located right near a round 20% year-to-date return for the shares, and just below a 38.2% retracement of the ETF’s decline from its January 2018 closing high into its January 2019 closing low,” according to Schaeffer’s.