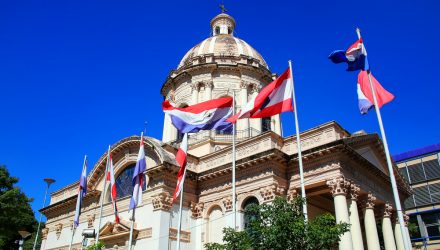 As expected, Covid-19 took a hit on Latin America like it did the rest of the world. In order to stem the tide of its economic effects, countries like Paraguay are issuing more bonds—lots of bonds—try $1 billion, according to a Bloomberg report.

“Paraguay intends to issue as much as $1 billion of long-dated global bonds next year to help cover its budget deficit and refinance existing debt as the economy recovers from the coronavirus, Finance Minister Benigno Lopez said,” the report said. “The land-locked South American nation is considering selling a $500 million bond dated as long as 30 years, Lopez said in a telephone interview Friday. The government will also seek to extend maturities and refinance at lower interest rates on $500 million of its $5.36 billion in international debt issued since 2013, he said.”

“We have to continue building the curve for now,” said Lopez.

The report also noted that Paraguay has become one of the “fastest-growing Latin American countries during most of this century, Paraguay has coped with the pandemic-driven activity contraction better than the average of the region. Still, stimulus measures to bolster the economy and contain the virus will widen the fiscal deficit to more than 7% of gross domestic product this year.”

In the meantime, ETF investors can place bets on Latin America funds to make a play on economic recovery. One fund to consider is the iShares Latin America 40 ETF (ILF). The fund seeks to track the investment results of the S&P Latin America 40TM composed of 40 of the largest Latin American equities.