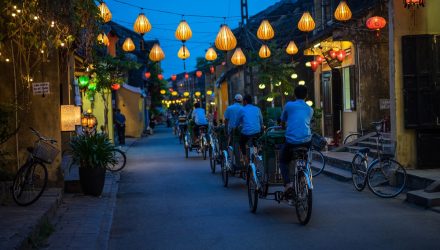 VNM: An ETF for Long-Term Potential in Vietnam Economy

The VanEck Vectors Vietnam ETF (NYSEArca: VNM), the lone US-listed exchange traded fund dedicated to Vietnamese stocks, is higher by nearly 16% this year. Patient, long-term investors may be able to realize even larger gains in the Vietnam ETF.

“Vietnam has surged to become Southeast Asia’s best-performing stock market this year, posting a 12% gain for the benchmark VN index on the Ho Chi Minh Stock Exchange. According to Bloomberg data, Vietnam was the third-best performing market globally over the past five years,” reports Forbes.

Over the long-term, the $425.1 million VNM could be one of the more interesting stories among single-country ETFs, particularly as Vietnam extends its push to shed its frontier market status to become an emerging market in the eyes of index providers, such as MSCI.

“Vietnam appears to be Asia’s most interesting macro story and investment case this year. The country’s ongoing economic reforms combined with recent geopolitical developments have certainly bolstered the country’s outlook,” reports Forbes. “The World Bank expects Vietnam to be among Asia’s fastest-growing economies this year, with the country’s GDP growth rate forecast to reach 6.6%.”

VNM allocates a combined 43% of its weight to real estate and financial services stocks. The ETF also features robust exposure to the Vietnamese consumer as the consumer staples and discretionary sectors combine for 26.70% of the fund’s weight.

“Vietnam’s wealth grew by 210% between 2007 and 2017, according to the real estate consultancy Knight Frank, and more than 200 Vietnamese citizens now have investable assets of at least $30 million,” according to Forbes.