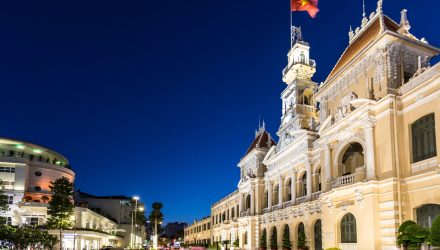 Vietnam’s economy is skewing back toward the upside, which should put assets like the VanEck Vectors Vietnam ETF (VNM) in focus.

“A surging U.S. economy on the back of massive stimulus and pent-up demand will benefit exporters in Asia, with Vietnam receiving the biggest windfall,” a Bloomberg article said.

“If the U.S. growth rate accelerates to 7.7% in 2021 as forecast by Bloomberg Economics, up from the 3.5% seen late last year, that would add more than 1 percentage point to Vietnam’s expansion, research by Chief Asia Economist Chang Shu showed Tuesday,” the article added. “China will also see a significant gain of around 0.6 percentage points.”

As for the fund, VNM seeks to replicate as closely as possible the price and yield performance of the MVIS® Vietnam Index.

Shu noted that the U.S. is responsible for purchasing more than 10% of Asia’s exports. There’s also a spillover effect for Asian firms involved in supply chains tied to the U.S.

“The projection from Bloomberg Economics factors in an estimated $1.7 trillion of extra savings by American consumers and wealth effects from higher asset prices,” the Bloomberg article added. “As a result, it is significantly higher than the consensus forecast of 5.8% as of April 8, which compares with 3.8% in November.”

“Furthermore, Shu’s research revealed that a showed that even that more modest upgrade would give a bump to growth in Asian economies ranging from 0.14 to 0.52 percentage points, with China’s growth expected to be lifted by around 0.3 percentage points,” the article said further.