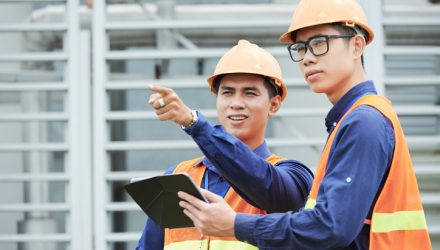 The VanEck Vectors Vietnam ETF (VNM) is poised to be a winner as the U.S. and China continue to duke it out over trade.

The line of thinking goes like this. The longer the trade war lingers, fears of a non-deal will rise triggering companies to shift manufacturing from China to other countries, with Vietnam being eyed as the golden child.

At the G-20 summit later this week, President Donald Trump and Chinese President Xi Jinping are anticipated to revive trade talks. If those talks are fruitless, Trump has threatened 25% tariffs on an additional $300 billion worth of Chinese goods.

“Some companies, such as Brooks Running — which is part of Warren Buffett’s Berkshire Hathaway — are not waiting to see if the additional China tariffs will go into effect,” CNBC reports. “CEO Jim Weber said back in May that Brooks would be ‘predominantly in Vietnam by the end of the year.’”

Vietnamese companies such as apparel and shoe makers are gearing up to grow as businesses shift to the country, according to CNBC. The Vietnamese government has also implemented reforms to attract investments. For instance, the country has cut the corporate tax rate to 22% from 25% and set a goal to train 2 million people in vocational schools.

The growth potential is real. Looking out over the next decade, forecasts estimate the country to grow at 6% – 6.5%, according to a report cited by Bloomberg.

Adding to the growth potential, “Ministers from European Union countries on Tuesday approved a landmark free trade agreement with Vietnam, which will reduce tariffs on 99% of goods over a period of 10 years,” Euronews reports.