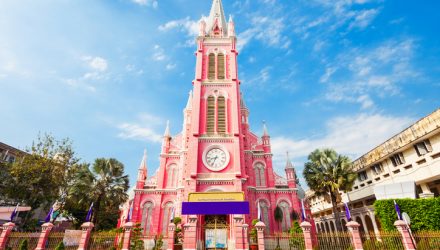 The VanEck Vectors Vietnam ETF (VNM) is up more than 11% this year and has been highlighted as a winner in the US/China trade spat, but some market observers see more potential upside in shares of Vietnamese companies.

Fitch Ratings recently boosted its outlook on Vietnam’s credit rating to Positive from Stable while reiterating a BB rating. The Vietnamese government has also implemented reforms to attract investments. For instance, the country has cut corporate tax rate to 22% from 25%.

“Recently, Vietnam has attracted global investor interest as a potential beneficiary of the ongoing trade war between the U.S. and China, but investors have also taken notice of the country’s attractive long-term fundamental characteristics,” said VanEck in a recent note. “As the government seeks to boost foreign investment by relaxing foreign ownership limits on local companies, Vietnam’s status as a frontier market may change in the future. Additionally, Vietnam is leveraging its international trade relationships to maximize the benefits of an export-driven local economy, against the backdrop of a changing global economic landscape.”

A Bright Future for Vietnam Investing

While Vietnam is currently classified as a frontier market, its economic growth has long outpaced that of the average emerging market.

“We believe the investment case for Vietnam is supported by several long-term dynamics,” said VanEck. “First, Vietnam’s growth rate has increased since the 2008 global financial crisis. For the last 10 years, Vietnam’s annual GDP growth rate has exceeded 6%, compared to an average of 5% for emerging market countries.”

Driving the long-term thesis for VNM are some of the best demographic trends in developing or frontier economies.

“Demographics are also helping to fuel long-term, sustained growth. Vietnam’s population is growing, has a median age of 31 years and is more educated than its neighbors in Southeast Asia,” according to VanEck. “This young, educated population is contributing to a rising middle class, which we believe may drive higher rates of domestic consumption. While Vietnam is not currently in a full-blown transition to a consumption-driven economy like China, the same types of structural changes are taking place and driving the Vietnamese economy.”