You are at:Home»Beyond Basic Beta Channel»Vietnam ETF Offers Opportunity With Some Risk-adjusted 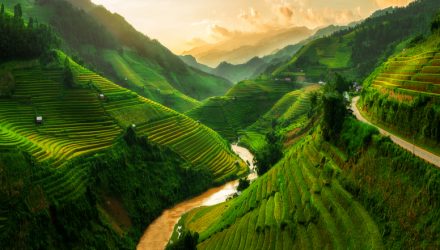 The VanEck Vectors Vietnam ETF (NYSEArca: VNM), the lone US-listed exchange traded fund dedicated to Vietnamese stocks, offers exposure to a fast-growing market, but with some of the usual risks associated with investing in frontier or emerging markets.

Favorable demographics and a booming economy are among the fundamental factors underpinning the Vietnam investment thesis.

“Vietnam is an ascendant nation. Economic growth is cruising at 6% to 7% annually, powered by an export sector ranging from T-shirts to smartphones. (Samsung makes most of its handsets there.) The population of 97 million is young (median age 31), cheap to hire,” reports Craig Mellow for Barron’s.

VNM could be one of the more interesting stories among single-country ETFs, particularly as Vietnam extends its push to shed its frontier market status to become an emerging market in the eyes of index providers, such as MSCI. Vietnam needs to liberalize foreign ownership limits before it can be a credible candidate for emerging markets status.

“The main holdup is regulations that limit most companies to 25% foreign ownership,” reports Barron’s. “Neighbors like Thailand and Malaysia finesse this question with nonvoting depositary receipts, raising the liquidity of their listed stocks. But Vietnam’s rulers seem in no hurry to follow suit. MSCI graduation will come no sooner than 2022, predicts Bill Stoops, chief investment officer for Dragon Capital in Ho Chi Minh City.”

Vientam has recently been highlighted as a beneficiary of the US/China trade war, but investors should be careful of embracing that factor as a primary thesis for getting involved with VNM. The fund is lower by 1.10% over the past month.

“China’s problems cut two ways for Vietnam,” according to Barron’s. “The country may steal some business bound for its biggest customer, the U.S. But China itself is a close No. 2. And as a classic export-driven emerging market—trade is nearly twice gross domestic product—Vietnam stands to suffer in the short term if the trade war damages global demand.”