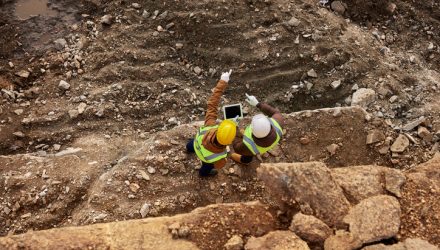 The VanEck Vectors Rare Earth/Strategic Metals ETF (NYSEArca: REMX), which is comprised of global companies involved in producing refining and recycling rare earth and strategic metals and minerals, has surged 15% in the past two weeks.

It’s up 3.34% today alone after a Chinese official recently cautioned that products made from rare earth minerals should not be used against the country’s development, reports CNBC.

“You suggested that rare earths could become one of China’s countermeasures against the U.S.’s unwarranted suppression…What can I tell you is that if anyone were to use products that are made with the rare earths that we export to curb the development of China, then the people of [south Jiangxi province where rare earths are mined]as well as all the rest of the Chinese people would be unhappy,” said the Chinese official, in an interview, reports CNBC. The speaker was described as a “relevant official” from the National Development and Reform Commission.

One of REMX’s biggest holdings is Lynas in Australia – it accounts for 7.22% of the weighting – is up 15.48% as 1 pm ET on Wednesday following the latest Chinese comments.

REMX is the only ETF targeting the pure rare earth metal space having AUM of $194.5 million and average daily volume of 188,000 shares. The product charges 59 bps in annual fees and has gained 9.44% in the year-to-date timeframe, according to XTF.com data.

For more news and analysis on the REMX ETF, visit www.etftrends.com/quote/REMX.