You are at:Home»Beyond Basic Beta Channel»VanEck Gaming ETF Could be a Good April Bet 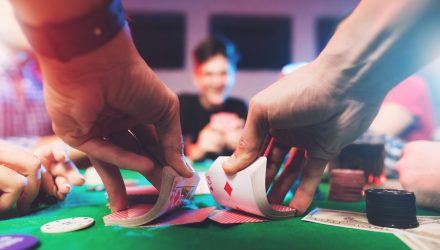 VanEck Gaming ETF Could be a Good April Bet

The VanEck Vectors Gaming ETF (NYSEArca: BJK), the lone exchange traded fund dedicated to casino operators and gaming companies, is up more than 9% this year and the fund could extend those gains if it holds true to its historical form in the month of April.

Over the past decade, BJK has been a stellar performer in the fourth month of the year.

“Of all the ETFs we track, BJK has generated the biggest average April return of 5.3%, according to data from Schaeffer’s Senior Quantitative Analyst Rocky White. Further, it’s one of the few funds that have ended April in the black at least 80% of the time over the past decade,” reports Schaeffer’s Investment Research.

BJK, which turned 11 years old in January, holds 43 stocks and has $27 million in assets under management.

Over 16 countries are represented in BJK with the U.S. commanding nearly 42% of the fund’s weight, but good news for Macau is helpful to the ETF because it devotes more than 15% of its weight to China. Macau is the only Chinese territory where gambling is legal.

“The shares of BJK have added nearly 10% so far in 2019, but recently ran into a wall in the $38 region,” according to Schaeffer’s. “This level has acted as a roadblock for the ETF since October, and also represents a 38.2% Fibonacci retracement of the fund’s fall from its May highs to its Dec. 26 lows. Further, the formerly supportive 160-day moving average has descended into the area, and contained BJK’s rally attempt in late February. At last check, the ETF was trading around $36.25. Another 5.3% bump from current levels would place the shares around $38.17, right around its February highs.”