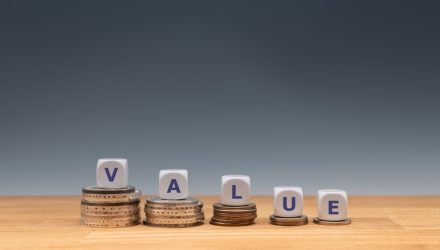 Value equities are trouncing their rivals this year, and while the gap between the two is narrowing, some market observers believe there’s still fuel left in the value tank.

That could be a positive for exchange trade funds such as the VanEck Vectors Morningstar Wide Moat ETF (MOAT). MOAT, which follows the Morningstar Wide Moat Focus Index, isn’t a dedicated value fund, but one of its objectives is to find wide moat stocks trading at attractive valuations, making it relevant in the value conversation.

“Value stocks typically trade cheaply relative to their fundamental values. In early 2021, in Value investing: Is this the biggest opportunity since the tech bubble?, we showed that value had become as cheap relative to their macro-sector peers as it was at the top of the 2000 tech bubble,” according to BNP Paribas research.

Year-to-date, MOAT is outperforming the S&P 500 by more than 500 basis points, indicating that there’s value in the combination of attractively valued wide moat names. Part of MOAT’s advantage is that it’s underweight to technology stocks relative to broader benchmarks, but the VanEck fund still allocates a quarter of its weight to tech.

Fortunately, valuations are coming down in tech. Equally as important is the point that MOAT tech holdings — Microsoft (NASDAQ:MSFT) being a prime example — display quality traits. Stocks steeped in quality are often less volatile than their lower-quality counterparts — a relevant consideration in today’s turbulent market setting.

It’s clear that markets are displaying a preference for quality and that stocks that don’t fit that bill are among this year’s worst offenders. That’s something to ponder particularly if value spreads widen.

“A typical catalyst that can start to expand the value spread is an increase in the difference between the expected earnings growth of value stocks and that of the most expensive stocks, as happened from mid-2018 through late 2020,” added BNP Paribas.

With a third of its weight directed to defensive healthcare and consumer staples names, the former of which is undervalued in the eyes of some experts, MOAT could be ideally positioned for additional strength in value stocks in the back half of 2022.

“With that in mind, and given that value spreads are still relatively wide, we foresee an above-average outperformance of value stocks relative to their most expensive peers in each macro-sector as the most likely scenario in the medium term,” concluded BNP Paribas.