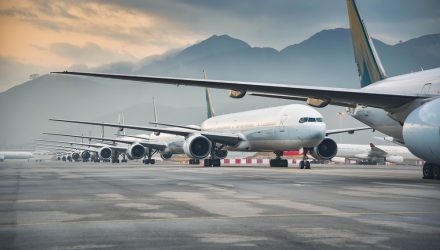 The reopening economy trade is in full swing, and traders looking to make an indirect play on U.S. air travel increasing can look to oil assets like the VanEck Vectors Unconventional Oil & Gas ETF (FRAK).

“The number of U.S. air travelers exceeded 1.5 million on Sunday, for the first time since the middle of March 2020, in a good sign for oil demand as U.S. citizens start to travel more, including by plane,” an OilPrice.com article noted.

FRAK, which is up 40% YTD and over 150% the past 12 months, seeks to replicate as closely as possible, before fees and expenses, the price and yield performance of the MVIS Global Unconventional Oil and Gas Index, which is intended to track the overall performance of companies involved in the exploration, development, extraction, and/or production of unconventional oil and natural gas.

“Travel and consumption patterns in the world’s top oil consumer, the United States, and in the world’s top oil importer, China, point to recovering demand for petroleum products,” the OilPrice.com article said further. “Those two countries—major consumers of crude—could lead global oil demand out of the woods and lead the global consumption rebound later this year.”

One Year Later, TSA Activity Is Picking Up Again

The U.S. Transportation Security Administration (TSA) released data that showed an increasing number of U.S. travelers. With more travelers taking to the skies, this can help fuel oil demand globally.

“According to data from the U.S. Transportation Security Administration (TSA), as many as 1,543,115 travelers passed through security checkpoints at U.S. airports this past Sunday, the highest number of travelers since March 13, 2020,” the article noted further. “The last time U.S. airline passenger numbers topped 1.5 million was on March 15, 2020, when 1,519,192 travelers were screened at American airports, just before flights began being grounded as mobility was restricted at the start of the pandemic.”

The article also noted that U.S. air traveler numbers have now been above the 1 million mark for 12 days straight.

“TSA screened 1,360,290 people at checkpoints yesterday, Monday, March 22, in spite of the fact that the @CDCgov does not recommend traveling at this time,” TSA Public Affairs spokesperson Lisa Farbstein said on Tuesday.