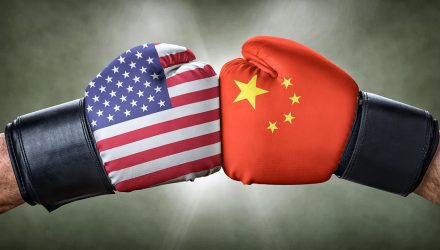 U.S. markets are reeling Friday after President Donald Trump told U.S. companies to start looking for alternatives to operations in China. China said Friday it will impose new tariffs on $75 billion worth of U.S. goods and resume duties on American autos.

Markets were already on edge Thursday, following Fed Chairman Jerome Powell’s comments from Jackson Hole, where he said the committee will remain vigilant, but did not promise any further rate cuts. Powell said he and his colleagues were trying to assess “this complex, turbulent picture” that has emerged in August, with financial markets volatile as Trump’s trade war with China escalates and the global economy weakens as a result.

“Based on our assessment of the implications of these developments, we will act as appropriate to sustain the expansion,” Powell said.

In response, President Trump reacted fiercely to Powell’s speech, questioning in a tweet if Powell was a more sinister “enemy” than Chinese president Xi Jinpeng.

Volatility, which had calmed some, with the VIX trading around 16 yesterday, quickly spiked above 20.41, as investors dumped stocks hastily.

Apple shares have led the way in technology, dropping 4.1% on the China tweet.

Then Trump tweeted on Friday: “Our great American companies are hereby ordered to immediately start looking for an alternative to China, including bringing..your companies HOME and making your products in the USA.”

Some experts see this tweet as a retaliation to Powell’s comments in itself.

“The threats always been out there but there’s been no need to provoke that,” said Art Hogan, chief market strategist at National Securities. “It’s almost like the administration was expecting the Fed to announce a rate cut at the Jackson hole meeting. And since Powell did not deliver, he went to defcon 5.”

Bearish investors looking to enjoy any declines can look into the Direxion Daily S&P 500 Bear 1X ETF (NYSEArca: SPDN) for the equivalent of shorting the market. Alternatively, exploring alternative investments like gold with the SPDR Gold Trust ETF (GLD) may be a better choice for safe-haven seekers.