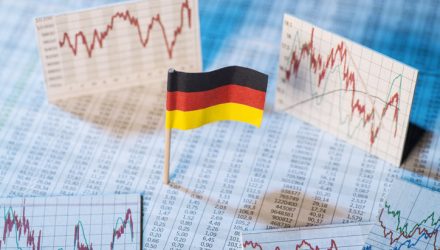 Why Trouble is Lurking For Germany ETF

German stocks have been lagging their U.S. counterparts in significant fashion, a fact underscored by a year-to-date return of just 3.59% for the iShares MSCI Germany ETF (NYSEArca: EWG), the largest ETF tracking German equities.

EWG’s Wednesday slide extends the fund’s month-to-date loss to over 5.5%. Making matters worse is that there’s a credible reason for the weakness in German equities: mounting fears that the Eurozone’s largest economy is nearing a recession.

Policymakers are walking a fine line as they try to assess the economic health. Meanwhile, investor confidence has not meaningfully picked up, and there have been sharp downgrades to the growth outlook.

“Germany’s economy shrank 0.1 percent from April through June and has been treading water for the last year, the government’s official statistics agency said. Analysts at Deutsche Bank predicted that the economy will shrink during the current quarter as well, meeting the technical definition of a recession,” reports The New York Times.

Collateral Damage As An Export

“Automobiles, Germany’s biggest export product, have become collateral damage,” according to the Times. “The carmakers Volkswagen, Daimler and BMW all earn at least one third of their revenue in China. But auto sales there have been slipping after years of explosive growth, in part because the trade war has unsettled Chinese consumers and discouraged them from making big purchases.”

EWG’s largest sector is consumer discretionary, which includes the automakers mentioned above. That sector is 17.47% of the fund’s weight. EWG’s technical health is worsening alongside fundamentals. The fund labors 6% below its 50-day moving average, 7% below its 200-day line and is close to entering a bear market as it trades 18% below its 52-week high.

The European Central Bank remains cautious as officials have warned of the worsening outlook for the euro area amid rising risks from global trade disputes, like the U.S.-China trade scuffle, and the threat of a helter-skelter Brexit. While the policymakers have raised the prospects of a new policy move, no one has pulled the trigger yet.