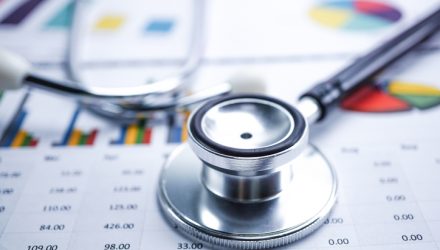 Time to Checkup With Healthcare ETFs

The SPDR Health Care ETF (XLV), the largest healthcare ETF by assets, has recently traded higher and while the gains are modest, XLV’s recent strength could be a sign it’s time for investors to revisit the S&P 500’s second-largest sector weight.

“f health care hasn’t been left for dead, it has at least been left behind in 2019. The S&P 500 Health Care Sector index has returned just 8% this year, while the S&P 500 has gained 22%. That makes the sector the second-worst performer this year, besting only the beaten-down energy stocks,” reports Ben Levisohn for Barron’s.

“Either way, the political risks to health-care stocks may be fully reflected in the sector’s valuations,” according to Barron’s. “Lori Calvasina, head of U.S. equity strategy at RBC Capital Markets, cut health care to a Neutral weighting in March, citing crowding by fund managers and political risks. Fast-forward seven months, and the S&P 500 Health Care index trades at a substantial discount to the S&P 500.”

Healthcare was under pressure earlier this year after political risks associated with Medicare for All gained traction. Plus, the sector is now attractively valued.

“Health care isn’t just cheap—it is the second-cheapest S&P sector. At 15.1 times 12-month profit forecasts, it trades at a lower multiple than any other group, except financials. Is the discount big enough to encourage investors to start bargain hunting?” according to Barron’s.